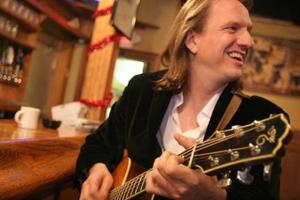 Ellis Paul is one of the leading voices of the American singer- songwriter world. He was a principle leader in the wave of singer/songwriters that emerged from the Boston folk scene, which helped revitalize the national acoustic circuit with an urban, literate, folk/pop style that helped renew interest in the genre in the 1990′s. For years, he has been among the singer songwriter circuit’s most popular and dependable headliners with fiercely loyal fans all over the globe.

Ellis’ current studio album release, “The Day After Everything Changed” was made possible by contributions from fans, who in return received goods and services such as signed guitars, house concerts and writing a song for a loved one. As an independent artist with his own label Black Wolf Records, Ellis raised over $100k in the middle of a deep recession. The result of this project is an excellent example and true testament to the relationship Ellis has built with his fans and the mutual respect they have for each other. This is Ellis’ first studio album without a records label in 10 years.

Ellis’ charismatic, personally authentic performance style, have influenced a generation of artists drawing from the appeal of pop blending with the authenticity of folk. Ellis is one of the most pop-friendly of today’s singer-songwriters. He has bridged the gulf between the modern folk sound and the populist traditions of Woody Guthrie and Pete Seeger more successfully than perhaps any of his songwriting peers.