Skyfactor with Greetings From Anywhere 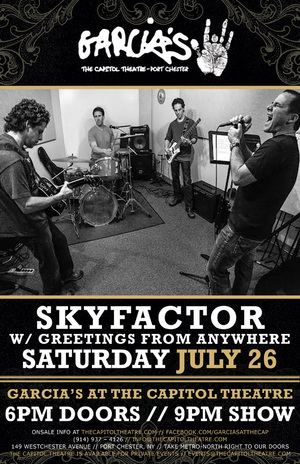 SKYFACTOR and GREETINGS FROM ANYWHERE, two of Westchester County’s acclaimed original rock bands, are making their debut at the much-buzzed-about new concert venue Garcia’s at The Capitol Theatre in Port Chester, NY on Saturday JULY 26th.

Rockoustic” outfit SKYFACTOR, supporting their new album Signal Strength (available on iTunes, Amazon & CD Baby), are mainstays on most New York City stages and at various music festivals in the Northeast, and as a result rarely play clubs in their own backyard. Says guitarist/co-songwriter Jon Rubin, “Garcia’s is a huge addition to the local music scene and we simply can’t wait to play there. Finally, our fans and friends from each of our hometowns can all come out and just have a blast.”

SKYFACTOR’s memorable, dynamic songs grab the listener from the get-go, thanks to personal, insightful lyrics backed by a big acoustic guitar and one very powerful rhythm section. People outside the NY area know them from their track “OK,” which MTV used as the theme music to an episode of their hit show Teen Mom. Skyfactor was also heard on NBC’s The Voice last year and on a Sirius/XM broadcast of one of their NYC concerts.  More locally, the band has earned some airplay on “The Peak” 107.1 FM.

GREETINGS FROM ANYWHERE mashes folk, blues, bluegrass and country into a unique roots-rock hybrid, performing with the gritty, impromptu abandon of an old-time garage band. Graceful lead vocalist Sheila Noonan-Gorham takes center stage, but each supporting band member is known to take his/her own turn singing lead vocals, creating a special dynamic to every performance. The group is in the final stages of recording their newest album (in Dobbs Ferry, no less), slated for a fall release.