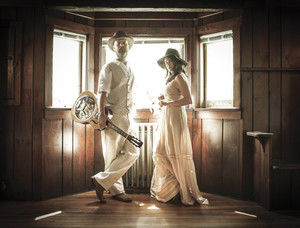 http://www.thegrahamsmusic.net/All shows will be in Hastings-on-Hudson, New York
Music starts promptly at 5:00 PM
Doors open for Potluck dinner at 4:00 PM - Bring a dish!

The Grahams, the creative union of lifelong romantic partners Alyssa and Doug Graham, combine soulful bluegrass with hints of earthy Americana, adding colors from traditional folk and country blues, into an infectious blend of storytelling that results in songs of love, loss, yearning, and the view from rural American roads less traveled.

While the duo first met in grade school -- a trait shared by previous musical trail-blazers, from Lennon/McCartney to Jagger/Richards - the Grahams' journey together began when they were teenagers in the shadow of New York City. There, Alyssa, the impassioned troubadour, and Doug, the guitarist extraordinaire, shared a mutual love for the music of the Woodstock era and the adventures of the great outdoors. Over the ensuing years many a campfire lit acoustic jam would include the best of roots renegades like Neil Young, The Band, Gram Parsons, Janis and Emmylou along with more than a few Jerry Garcia and Johnny Cash nuggets. Later, spending much of their time in the secluded Adirondack Mountains at the Graham family fold, Alyssa and Doug learned the time-honored craft of songwriting. Here, their ongoing interests in traditional country, mountain bluegrass and folk legends such as The Carter Family, Dock Boggs and Mississippi John Hurt would blossom. Hoping to share their stories on a wider stage, the couple eventually settled in New York City, where they performed, collaborated and recorded a variety of acclaimed material before adopting The Grahams moniker.

While the duo had written music together before, in the summer of 2012 new writing sessions yielded a different approach. Something magical was happening between Alyssa and Doug. Their debut album, "Riverman's Daughter," is a winning culmination of The Grahams' long journey into the heart of America, the inspiration they derived from immersion into classic American music, and the natural and honest talent they have for bringing forth a modern musical idiom steeped in tradition.