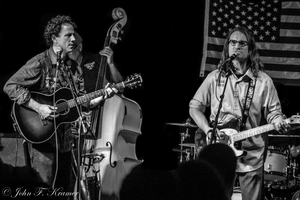 Hudson Valley, New York based duo Gillen & Turk will be performing this homecoming show upon just returning from their Love Revival Midwest Tour.  The show will feature songs from Turk's critically-acclaimed CD Cold Revival, Gillen's recently-released CD Wage Love, some new songs the duo has been co-writing and some old favorites.  Guitar Player Magazine had this to say about Turk's Cold Revival: "On his latest release, Cold Revival, Matt Turk expertly weaves track after track of acoustic guitar and mandolin into a folk-rock fabric where they can stand on their own or sit comfortably side by side with electric guitars, lap-steel, keys, and vocals."   Gillen's new release Wage Love spent several months on the folk dj chart, receiving folk radio play all over the U.S., Europe, Australia, and New Zealand.  Eric Petersen of Rust Magazine says: "(Wage Love) is going to join other great works in the endless history of our world. Reaching back to those first definitive union anthems, Wage Love bridges the generations and eras of our shared culture to find profound truths both new and old in the quietness of poverty – either fiscal or philosophical."

Together the two employ Turk's tasty mandolin and guitar playing, Gillen's quirky washboard, rootsy-rhythmic guitar, and bluesy harmonica, and two-part vocal harmonies to create a sound which combines traditional folk and modern alternative sensibilities.  They have toured all over the U.S., opened for and performed with Todd Rundgren, Pete Seeger, and Peter Yarrow, and had a song on CMJ's New Music Marathon CD, distributed to 11,000 CMJ conference attendees.  They are also a part of the Music Under New York program, performing in the New York City subways.

There is no admission charge. Copies of Wage Love and Cold Revival will be available at the show.