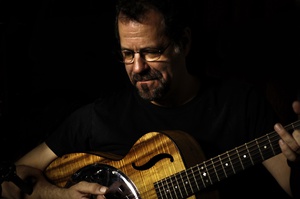 Groovin’ in New Fairfield is proud to present Cliff Eberhardt with special guests, Sarah Blacker and Cadence Carroll, on Saturday, September 26, 2015 at 7:30pm, at the New Fairfield Senior Center, 33 Route 37, New Fairfield, CT.  Tickets are $10 and doors open at 6:45 pm.

Red House recording artist Cliff Eberhardt knew by age seven that he was going to be a singer and songwriter. As a child Cliff taught himself to play guitar, piano, base and drums. In his teens Eberhardt was fortunate enough to live close to the Main Point (one of the best folk clubs on the East Coast) and was heavily influenced by folk and blues artists such as James Taylor, Joni Mitchell, Bruce Springsteen, Muddy Waters, Bonnie Raitt, as well as great pop songwriters like Cole Porter, the Gershwins, and Rodgers and Hart, which explain his penchant for great melodies and clever lyrical twists. A driving force of the Greenwich Village New Folk movement and well known among his peers, Cliff’s songs have been covered by the likes of Richie Havens, Buffy St. Marie, Erasure, Lucy Kaplansky and the folk superstar band "Cry, Cry, Cry" (Dar Williams, Richard Shindell, Lucy Kaplansky).  cliffeberhardt.net.


Singer-songwriter Sarah Blacker grew up listening to her parents’ records, including Paul Simon, CSNY and the Beatles, which formed the foundation of her musical consciousness.  As she grew up, she fell in love with alternative rock and singer-songwriters of the 90s.  After attending Berklee College of Music, she graduated as a Board-Certified Music Therapist as well as an accomplished performer and songwriter.   Her latest release “In Waves” features Sarah’s strongest songwriting and musicianship to date.  With a uniquely soulful voice and skillful rhythm guitar, ukulele and piano, you can immediately hear the strong emotional content of her music.  Her songs artfully span rock, pop, indie folk and Americana fused together.  Sarah was named “Female Performer of the Year” at the New England Music Awards in 2013. She has toured extensively and shared the stages with dozens of internationally renowned artists including  10,000 Maniacs, Paula Cole and Leon Russell.  sarahblacker.com


Cadence Carroll grew up surrounded by music. Her mother, who was a music teacher, taught Cadence guitar in addition to the violin.  In college in Ithaca, NY, she fell in love with the sounds of African-Cuban percussion. There she found a passion and natural affinity for accompanying fellow musicians on the djembe, a large African hand drum. Cadence has been a feature performer at venues up and down the east coast touring her full-length CD, “Evolve” produced by established folk duo The Kennedys. When she’s not performing original songs on guitar and drum, Cadence can be found providing support as a back-up percussionist and vocalist, as well as teaching African Drumming, Percussion and Accompaniment at various songwriting camps, private venues and in her home in Newtown, CT.  Cadence believes that drumming heals the body, mind and spirit and welcomes the chance to share the joy with all!