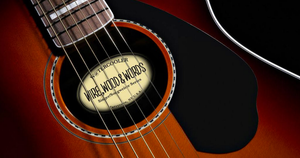 Wire, Wood & Words will give the audience a glimpse into the creative process and backstories behind some of our featured local artists’ favorite songs, as each artist takes a turn sharing stories and songs in this "in-the-round" format show.

We look forward to an unforgettable evening of great music and hope you can help us welcome and support these three amazing artists!

Over a third of the proceeds of this event will be donated to Music Works a Not-For-Profit founded by Judy Kass and Allison Paul in 2008 to provided one-on-one music lessons to low income students of color who have shown musical aptitude and enthusiasm for their instrument.

Fred Gillen Jr. | As a songwriter, singer, musician, producer, engineer, and poet, Fred Gillen Jr. creates art with purity of intent, an open heart, honesty, and tireless dedication to craft. Part folk singer, part indie rocker, and part poet, he writes and sings songs about the human experience, honestly, fearlessly addressing pain, injustice, and isolation in his work, but also acknowledging and celebrating the hope in everyday existence. His work often tells the unglamorous yet compelling stories of the lost and forgotten, the marginalized and ignored. Yet the overwhelming tone of Gillen's songs and stories is one of hope. Gillen involves his audience and encourages participation, and his live performances are reckless celebrations of being alive. Gillen's musical influences range from Bob Dylan and Woody Guthrie to Queen and Elton John, to Yes to Elliott Smith. From James Brown and Stevie Wonder to The Clash and Johnny Cash. His parents listened to Jazz and Country around the house, but Gillen gravitated to Rock N Roll, then to delta blues, and then became obsessed with Woody Guthrie. Gillen is a folk singer and a rocker, a roots musician and a modernist, as at home playing washboard or acoustic guitar as playing with drum loops and samples. Hear some of Fred's music.