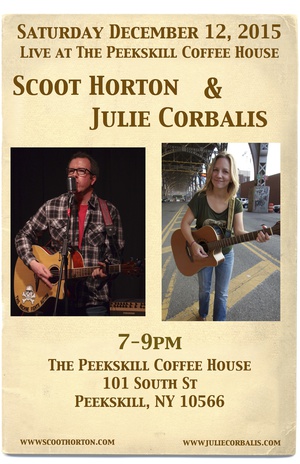 Come out and listen to Scoot Horton and Julie Corbalis.

SCOOT HORTON began his music career in 1990 playing and touring in New York City based hardcore punk bands. Then Scoot unplugged the amps went acoustic playing folk/roots music. In 2015 he released his solo debut CD “Six 2 Seven” . Scoot has been described as Woody Guthrie meets the Sex Pistols. He calls it "Outlaw Folk".

JULIE CORBALIS is a New York-based singer-songwriter who has been performing her own music as well as classic covers since 1996. Corbalis has recorded five albums to date: two with her band Jules & The Family (Jules & The Family, 2005; Border Radio, 2007), two as a solo performer (Old Flames And New Names, 2008; Songs In A Bottle, 2013), and one as a collaborative effort with other local musicians (Backwoods Jupiter Presents Bob Dylan's Desire, 2011).