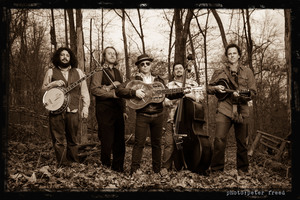 Fiddler Clarence Ferrari is a multi-instrumentalist, composer and music educator who has toured extensively throughout North America and Europe, including appearances at The Kennedy Center and Chicago Symphony Space, specializing in Celtic and Bluegrass fiddle.  Clarence has performed on dozens of records, television shows and films including  “The Astronaut Farmer”.  Clarence has appeared alongside many well-known performers including Pete Seeger, Roland White and Rosanne Cash.

New York vocalist, upright and electric bassist Chris Conte had a banner year in 2015 with the release of his debut album, Our Love Will Last, a collection of classics from the American Songbook.  As the leader of the Jazz/Jam Band "The Phunk Philosophers," Chris released their first album as well:  Funk & Groove Dance Party.  Blending ideas and sounds from America’s musical history is his biggest thrill and Chris is right at home as the Deadgrass bassist and high harmony vocalist.