Scott Wolfson and Other Heroes, Davey O in Concert 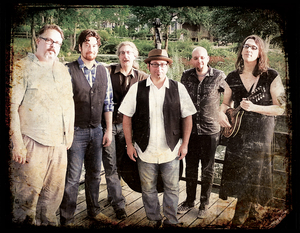 Scott Wolfson and Other Heroes are fast making a name for themselves as New Jersey’s indie folk powerhouse. From beginnings in 2011, they have launched into success both on the air and on the ground: their debut album, Life On Fire, reached #8 on the Roots Music chart and stands at #162 on Folk DJ’s list of most played 2014 albums, and the band has appeared onstage at the Philadelphia Folk Festival, in studios including WFUV with John Platt, and as an Emerging Artist at the 2015 Falcon Ridge Folk Festival.

With their 2016 release, Welcoming The Flood, they stand ready to broaden that success, expanding both the lyrical imagery of Scott’s songwriting and the catchy, complex sound of the band. Keep an eye out for them on stages, at house concerts or at festivals near you.

“They’ve kicked it up another notch…the band continues to mature and even the quieter songs carry a bit more drama. As the songs continue to spill out of Scott Wolfson’s fertile imagination, they keep getting more infectious and intriguing.”
-  Richard Cuccaro, Acoustic Live in NYC -
www.scottwolfson.com

Songsmith Davey O crafts pure Americana that draws from the deep well of experience and human emotion, an unflinching poet’s look at life. He is a 2013 Kerrville Folk Festival New Folk finalist and his latest CD, No Passengers, has received top airplay on folk radio, debuting in the top 20 on Folk DJ.
www.daveyO.com
Tickets: $20 advance, $23 door  www.hurdygurdyfolk.org or 201-384-1325
Doors at 7:30 PM, Refreshments available.