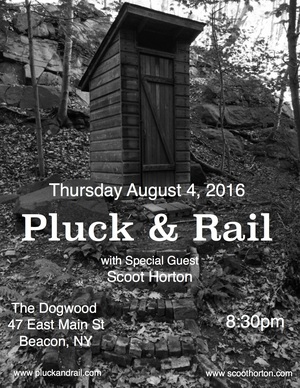 Stop on by the Dogwood in Beacon on Thursday August 4th for some good time music and some great food.

The night starts out with Pluck and Rail with a between set set by Scoot Horton.

Pluck & Rail is the acoustic intersection of Andrew Sussman of the prog-rock heavyweights, Frogg Café, and George Gierer of the folkabilly band, South County. George bought his first guitar at age 17 and moved to Austin, TX, where he soaked up the sounds of the south and was forever changed. After hearing hearing Eddie Van Halen at the age of 15, the classically-trained cellist Sussman starting spinning Bach into the blues and Beethoven into Zappa.       http://pluckandrail.com

Scoot Horton “Old Punks Don’t Die, They Go Country” is not only a line in one of Scoot Horton’s songs, but it describes Scoot as well. After spending 20 years playing and touring in various punk bands Scoot unplugged his guitar and went acoustic, releasing his debut CD “Six 2 Seven” to positive reviews in 2015. Scoot spent much time in the New York City Hardcore Punk scene, some of that inuence naturally comes out in songs like “Life and Hope” and “Bank Man.” And people have noticed. He has been described as the Sex Pistols meet Woody Guthrie. Scoot calls it Outlaw Folk. Which is short, sweet, and to the point.   http://www.scoothorton.com

Hope to see you there.