Scott Wolfson and Other Heroes & The Gaslight Tinkers in Concert 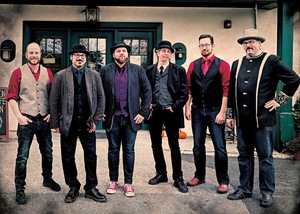 Alternative folk band Scott Wolfson and Other Heroes will bring their infectious energy to the Turning Point Café in Piermont NY, performing on a co-bill with The Gaslight Tinkers.

Scott Wolfson and Other Heroes are celebrating their fifth year as New Jersey’s indie folk powerhouse.  From beginnings in 2011, they have launched into success both on the air and on the ground.  Their debut album, Life On Fire, reached #8 on the Roots Music chart and charted on Folk DJ’s list of most played 2014 albums. 2016’s Welcoming the Flood gathered rave reviews and top-charting airplay, and the band continues to expand its touring range.  Dubbed “wizards” and “musical scamps”, they deftly adapt their big, catchy, complex sound from festival stages to listening rooms. The band loves to swap songs with fellow players, and it shows. Lucky audiences have caught them hatching musical mischief on stage with their friends including The Kennedys, The Levins, Bobtown, and fellow 2016 Falcon Ridge “Most Wanted” artists Gina Forsyth and Annika Bennett.  Add Scott’s lyrical imagery and  unconquerable voice soaring above the rich counterpoint laid down by Kirk, Matt, Chris, Skyler and Mike, and as No Depression’s Lee Zimmerman writes, they “...will not only defy the norm, but all expectations as well.”
www.scottwolfson.com
“This band doesn’t hesitate to ignite like a match on their fiery second collection, Welcoming The Flood. Listen to these dudes…these people are magicians…wizards…”
- John Apice, No Depression –

The Gaslight Tinkers’ blend of global rhythms creates a joyously danceable sound around a core of traditional old time & celtic fiddle music, merging boundless positive energy with melody and song. Since forming in 2012 the band has headlined clubs, dances and major festivals.
www.thegaslighttinkers.com

“The Gaslight Tinkers’ music is elaborate, sexy and layered folk, played without a hint of fuss.” –New Haven Independent -