Live at The Upstream 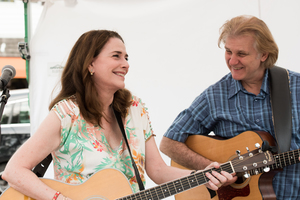 Susan Kane’s sweet and sharp Americana is an alchemy of stuff dug from the dirt, born from books, gleaned from the air, yesterday's news and tomorrow's daydreams. She weaves words and melodies to create songs to remember. Her fourth CD, Mostly Fine, released in July 2016, enjoyed wide airplay in the US and abroad. Coverlaydown.com called it "...a set of potent originals that reveal a rich and eminently human inner world through the superimposition of the mundane and the magic."

Hailed in review as "a master musician" by The Boston Globe; guitarist, producer, composer, arranger, songwriter, recording artist and performer Peter Calo stands out as an exceptionally versatile and accomplished talent on the crowded music scene." (WBZ-TV, Boston)

Most recognized for his work with Carly Simon, Peter Calo has recorded and performed with such legendary Grammy Award winning artists as James Taylor, Hall and Oats, and renowned record producer Phil Ramone, to mention only a few. He has performed on numerous television appearances, among them Good Morning America, Regis and Kelly, CBS Good Morning and the Late Show with David Letterman both as a band member and separately with featured guest.

Refreshments will be served, BYOB, too!