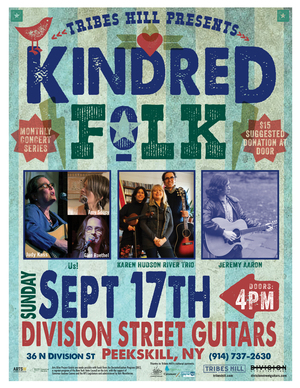 In addition to performing his own songs, Jeremy is the fiddler and guitarist in Spuyten Duyvil. He joined them on their tour to Israel in Spring 2016 where they headlined Jacob’s Ladder Festival and performed at Mike’s Place, Rimon School of Music, and First Station in Jerusalem.  Jeremy has accompanied Francis Falls, David Amram, Kirsten Maxwell, Joe Crookston, Deer Scout, Bakithi Kumalo, Pesky J Nixon, and Jann Klose.

Jeremy was raised in Nyack, NY, where he studied classical violin with Alicia Edelberg, Associate Concertmaster for the NYC Opera. He grew up attending Jay Ungar’s “Ashokan Fiddle and Dance Camp” where he was taught his first fiddle tunes by Jay Ungar, David Kaynor and John Krumm and his first chords on the guitar by folksinger Sally Rogers and Molly Mason. Canadian songwriter friend and mentor Philip Lewin encouraged Jeremy to begin writing songs as a teenager. After earning an undergraduate degree at Oberlin College, Jeremy began pursuing music and songwriting full time.

Jeremy released his debut solo album “In The Magic Light” in Summer 2017. It has aired on WFUV, WFDU, and syndicated radio show Wandering Minstrels.
____________________________
KAREN HUDSON RIVER TRIO
A distinctive presence in the NYC Americana scene, Karen Hudson wins audiences over with her edgy wit, elegant stage presence and wry, insightful tunesmithing. Hudson has been compared to Rosanne Cash by The Village Voice, and to early Linda Ronstadt by 3rd Coast Music Magazine in Austin, Texas. On her third CD “Sonic Bloom,” produced by Eric “Roscoe” Ambel, Hudson explores some gothic territory, but refuses to be held hostage by her loss, so even her darkest songs are tempered with wry humor. The musical roots go deep and broad — it’s ‘Americana’ for people who like to mix The Rolling Stones with their Patsy Cline. She has opened for Madeliene Peyroux, Walter Salas Humara and Pete Seeger. She often plays with Jim Petrie on guitar and vocals, and Suzanne Davenport on violin and vocals.
___________________________
Us!
Us! is what happens when three “seeker” singer songwriters join their eclectic talents and musical influences to create a sound that is infectiously harmonic, delicately robust, and full of unexpected twists and turns.

New York based Judy Kass, quickly draws in her audience with soulful vocals, no-nonsense lyrical storytelling and genre-bending exploration of guitar and piano. Her original music blends generous amounts of folk, jazz and blues with songs that cover the full gamut of mood and experience.  Judy’s 2014 debut album, Better Things and her recent release,  Beyond the Ash and Steel (2016)  both received notable airplay, topping Folk and Roots radio charts for months after their release and appearing on the Folk DJ List of Top Albums for the years 2014 and 2016 respectively.  https://www.judykass.com/

Amy Soucy is a Beacon, NY-based contemporary folk chanteuse who writes evocative songs exploring the kaleidoscope of human experience (dreams, longing, forgiveness and healing) and sings them in a voice that’s been called “powerful,” “comforting,” and “angelic.” In 2016, she was selected for a coveted spot in the Emerging Artist Showcase at Falcon Ridge Folk Festival, and took home first prize in the CT Folk Songwriting Competition. https://www.amysoucymusic.com/