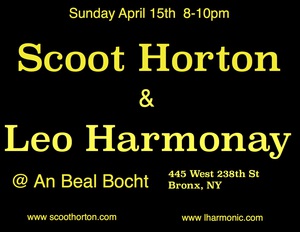 Stop by and hear Scoot Horton and Leo Harmonay each play a set of original music.

Scoot started out playing punk then went solo and started playing and writing Alt Country/Americana songs. He has since released his solo debut "Six 2 Seven" in 2015 and is writing for his next release.