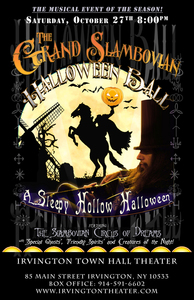 Called everything from ‘hillbilly-Pink Floyd’ to ‘surreal Americana’, the Hudson Valley's own Slambovian Circus of Dreams is bringing its legendary annual Halloween musical costume ball to Irvington! Formed in Sleepy Hollow, NY about 2 decades ago, The Slambovian Circus of Dreams “is a riveting, mesmerizing, crazy, amazing machine of music.” (Chronogram Magazine). And this year’s Grand Slambovian Halloween Ball theme is “Legends of Sleepy Hollow”, so break out your finest Headless Horsemen, Rip van Winkles or other ‘skeletons in the style closet’ in honor of Washington Irving (or any of your other favorite literary icons, real or imagined).