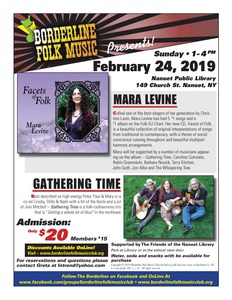 Mara Levine has been called one of the best singers of her generation by Christine Lavin.  Her new CD, Facets of Folk", is a beautiful collection of original interpretations of songs from traditional to contemporary, with a theme of social conscience running throughout and beautiful multipart harmony arrangements.  The CD was #1 on the January FOLK DJ chart, "Daughters and Sons" was the #1 song and Mara was the #1 artist.

Gathering Time, who will be performing the second half of the show, is a folk rock harmony trio best described as a co-ed Crosby, Stills and Nash with a bit of the Byrds and a jot of Joni Mitchell.  Group members are Stuart Markus, Gerry McKeveny and Hillary Foxsong.  They perform a combination of original music and classic 1960s folk rock along with re-imagined Traditional Music.  Their most recent CD, "Keepsake" was #1 in March, 2016 when they were also #1 artist of the month with a #1 song.

The legendary Si Kahn says "With Facets of Folk Mara Levine solidifies her position as a folk force to be reckoned with.  Her signature sound shines through with thoughtful song choices, creative harmonies, rich instrumentation and her own exuberant singing. With an emphasis on songs that make a difference, Mara has created music that is very much for today, but also for years to come."