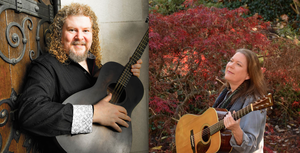 Joe Jencks
Joe Jencks is an 18-year veteran of the international folk circuit, an award-winning songwriter, and celebrated vocalist based in Chicago. Merging conservatory training with his Irish roots and working-class upbringing, Joe delivers engaged musical narratives filled with heart, soul, groove and grit. Having penned several #1 Folksongs including the ever-relevant Lady of The Harbor, Jencks is also co-founder of the harmony trio, Brother Sun. From Festivals like Falcon Ridge, Kerrville, Mariposa, and Old Songs, to venues like Lincoln Center and Carnegie Hall, Jencks has enthralled diverse audiences with his approachable style. Joe is noted for his unique merging of musical beauty, social consciousness, and spiritual exploration. Blending well-crafted instrumentals and vivid songwriting, Jencks serves it all up with a lyric baritone voice that has the edgy richness of a good sea-salt caramel.

Joe has a dozen CD releases to his credit, most recently The Forgotten (2018), and is the recipient of dozens of songwriting honors and awards as well. He has performed on stage with some of the greatest names in folk including Pete Seeger, Susan Werner, Holly Near and John McCutcheon plus many others. Throughout his work, he weaves a diverse web of stories with brilliant musical skill, ensnaring even the most rigid of hearts, inviting them to open.

Judy Kass
Growing up in a family of musicians, New York-based Judy Kass began playing at an early age moving from her classical piano training to accompanying the songs she soon started to write on both keyboard and guitar. Her music reflected the diverse genres and styles of the musicians she listened to from Laura Nyro, Janis Ian, Joni Mitchell, and Neil Young to Miles Davis, Sarah Vaughn, Keith Jarrett and Rachmaninoff.

Judy spent her teens and early twenties making music but graduate studies and other life ventures drew her away from regular performance although she continued to write and play. A passion for music education led her to found a community program (MusicWorks) in 2008 that provides talented students from low income families the opportunity to receive private lessons and mentoring. Funded by grants and community donations, MusicWorks has continued to grow since its inception giving students and their families the gift of serious music study and professional live performances.

The loss of nearly 300 colleagues to the 9/11 terror attacks propelled a shift in focus to healing herself and others and a return to her first love of acoustic music performance. The stories she gathered along the way together with some of her own would inspire the songs that grace Judy's debut album, Better Things (2014) and her recently released album Beyond the Ash and Steel (2016). Both albums have received strong airplay, appearing on the Folk DJ List of Top Albums and Songs charts for months after their release and on the Folk DJ List of Top albums for the years 2014 and 2016 respectively. She can be heard in a variety of regional venues as well as on the airwaves as both albums continue to gain national attention in the folk music arena.