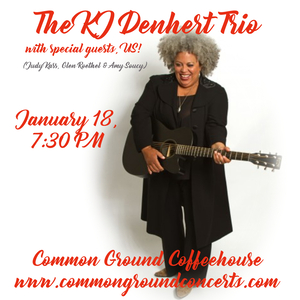 KJ Denhert’s performances will move you to laugh, to dance and even to cry. Her special blend of urban folk & jazz has earned her four Independent Music Award nominations and in ’09, she was named as one of Jazz.com’s top female vocalists. She’s appeared at scores of festivals and has residencies at the ’55 Bar’, Smoke in NYC, at the Baz Bar in St. Barth’s, and the prestigious Umbria Jazz Festival in Italy. Consistently praised for her pathos, originality and impeccable musicianship, KJ is a one of a kind songwriter, guitarist, and performer, not to be missed.

Opening the evening will be US!, featuring Glen Roethel, Judy Kass, and Amy Soucy. The trio combines their voices to lift up causes of social justice, unity, and the connectedness of all things. California born Glen Roethel is one-of-a-kind artist, gifted vocalist, dazzlingly musical acoustic guitarist. New York-based Judy Kass, quickly draws in her audience with soulful vocals, no-nonsense lyrical storytelling and genre-bending exploration of guitar and piano. Amy Soucy is a Beacon, NY-based contemporary folk chanteuse who writes evocative songs exploring the kaleidoscope of human experience (dreams, longing, forgiveness, and healing) and sings them in a voice that’s been called “powerful,” “comforting,” and “angelic.”