Songwriters in the Round Featuring Linda Draper, Fred Gillen Jr., and Carolann Solebello 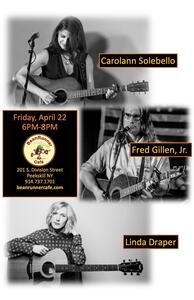 Weather-permitting this show will be outside in the Esther Street pedestrian area. If it moves indoors proof of vaccination will be required.

Linda Draper Bio
Linda Draper grew up in a musical home as the daughter of a classical guitar virtuoso who studied with Andres Segovia. She began playing guitar and writing songs as a child and eventually became a fixture in the downtown New York City's Antifolk music scene on the Lower East Side.
Since 2001, Draper has released numerous albums, toured the US and UK, and opened for acclaimed musicians such as Teddy Thompson, Melissa Ferrick, Luka Bloom, and Eilen Jewell. Draper has also seen her songs licensed for commercials and television.
She is now embarking on her biggest challenge to date with the formation of her own label, South Forty Records.
Patience and Lipstick,” Draper’s upcoming new album, was produced by Jeff Eyrich, mixed by Grammy®-award winning engineer, Dae Bennett, and features performers David Mansfield (Strings), Jeff Eyrich (Bass), and Doug Yowell (Drums and Percussion). It is the inaugural release on the artist’s own label South Forty Records.


Fred Gillen Jr Bio
NYFA (New York Foundation For The Arts) grant recipient Fred Gillen Jr has released eleven full-length albums, to great critical acclaim. He has performed all over the U.S. and Europe as a solo artist. From 2017 to 2019 he was music director of the Group The Greenheart, traveling to Nepal four times and India once, performing concerts to raise awareness of environmental activism. His songs have been featured on ABC's "All My Children," NPR's "Car Talk," CMJ's New Music Marathon Sampler, and in 2012 his version of Woody Guthrie's "I Ain't Got No Home" was featured on "Pete Remembers Woody," a collection of Pete Seeger's spoken stories about Woody Guthrie. interspersed with various artists' renditions of Guthrie's songs. Like Seeger and Guthrie, Gillen's lyrics often reflect both the hope and despair of the human condition, while his music illustrates the diversity of influences in the air when he was growing up in the 1970's. His live performances are spontaneous and full of storytelling, and he enjoys audience participation.

Carolann Solebello Bio
CAROLANN SOLEBELLO is a performing songwriter born and bred in New York City.  Best known to folk audiences as a founding member of Americana trio Red Molly, she now tours both solo and with modern folk quartet No Fuss and Feathers. Carolann’s smooth, compelling voice and warm acoustic guitar style surely nod to rural folk traditions, yet her decidedly urban sense of rhythm and sophisticated vocal phrasing bend those traditional forms into more contemporary shapes. She is a proud member of the Jack Hardy Songwriters’ Exchange and has won numerous songwriting awards. Carolann released her fifth solo album, Shiver, in 2018.