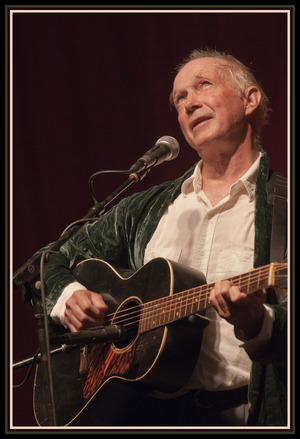 David Massengill hosts an evening of song in memory of our friend Jack Hardy on Thursday, March 31, from 6-9 p.m., at the Christopher Street Coffeehouse, 81 Christopher Street in New York City’s Greenwich Village. Folks are invited to bring their songs and memories of Jack, along with a dish or a beverage to share during a potluck supper.

Jack Hardy, a consummate singer-songwriter who played a pivotal role in the New York folk/songwriting scene for several decades and influenced and inspired many other songwriters, died on March 11. His passing at age 63 sent shockwaves through the folk community, with many posting short remembrances and tributes on Facebook — the social networking platform.

An engaging performer and a gifted songwriter, whose literate style blended Celtic and American influences with his own poetic vision. Social commentary, either implicit or explicit, was a major element in his writing (most notably on his latest album, Rye Grass), Jack Hardy also was a teacher, a mentor, and a major influence in advancing the careers of numerous other artists. He co-founded the Musicians’ Cooperative and the Fast Folk Musical Magazine, which issued more than 100 compilation recordings of then largely unknown artists over its 15 years. When songwriter sessions that he was instrumental in setting up at the Cornelia Street Cafe were no longer viable, Hardy began hosting weekly gatherings for songwriters in his Greenwich Village apartment in the mid-1970s. These get-togethers were frequented by such artists as Suzanne Vega, Christine Lavin, John Gorka, Shawn Colvin, Lucy Kaplansky, Richard Shindell, David Massengill (with whom he performed in recent years as the Folk Brothers), Richard Julian and many others, who shared pasta, wine and songs.

Vega, who was involved in Fast Folk since its inception, once said “We had a tribe and Jack was the nucleus of it.” Gorka paid homage to Hardy and his weekly songwriter sessions in the title track of his second album, Jack’s Crows. Lavin, herself a big-time promoter of other artists over the years, once referred to Hardy as “a true descendant of the bards and storytellers of ancient Scotland and Ireland” and posted the following on his Facebook page after learning of his passing: “Your impact on music is deep and will continue for many, many years.”

The World Folk Music Association honored Hardy in 1997 with its Kate Wolf Memorial Award that is given to an artist who makes a difference through his music.

Jack Hardy helped many aspiring singer-songwriters gain footing in New York, at Folk City and later at SpeakEasy and at the Cornelia Street Café’s Songwriter’s Exchange, according to Josh Joffen, a Long Island-based singer-songwriter who was an often-recorded songwriter on Fast Folk. He recalls that Hardy was instrumental in turning SpeakEasy, a failed disco nightclub into a 7/52/365 operation that became one of the biggest folk venues in New York City.

Noting that Hardy toured in the U.S. and Europe often and “produced a body of work that will stand as long as songwriting that reflects his values is appreciated,” Joffen says “Jack’s songs are often multi-layered, with strong images and stories, set in classical folk musical forms. But as editor of the Fast Folk[Musical Magazine], as host of the Songwriter’s Exchange in later years, and as a writer and artist, he was open to and appreciated other writers and their individual styles – if the work was good, if the songs said something, showed the writer’s intent, used language well, if they were purposeful.” However, Hardy was not beyond saying “Shut up and sing the song!” when songwriters waxed on interminably in introducing their songs during the gatherings that he hosted at his Houston Street apartment for more than 30 years. Indeed, “he was quite fond of saying it — to the point where it became an affectionate catch-phrase,” says Joffen. 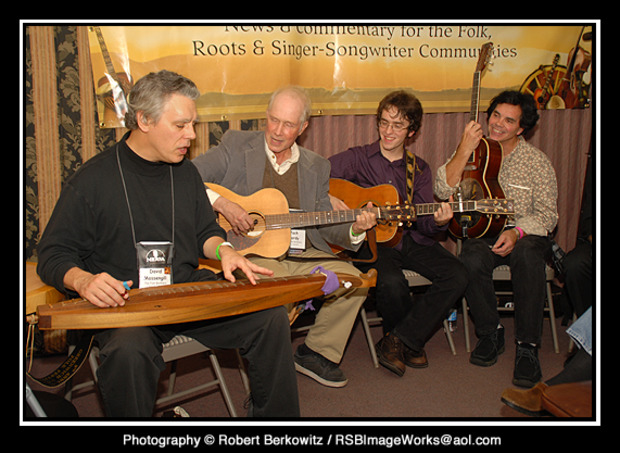 Hardy frequently hosted or joined in late-night song circles around campfires at folk festivals ranging from Falcon Ridge to Kerrville, where many will sorely miss his presence this summer. His music, however, lives on, as will the fond memories that many have of him. I’ll certainly not soon forget the wonderful concert that my father and I enjoyed at the Uptown Coffeehouse in the Bronx several years ago, or his duo performances with David Massengill as The Folk Brothers – including at AcousticMusicScene.com late-night showcases and song swaps that I hosted at the Falcon Ridge Folk Festival and the 2008 Northeast Regional Folk Alliance Conference.