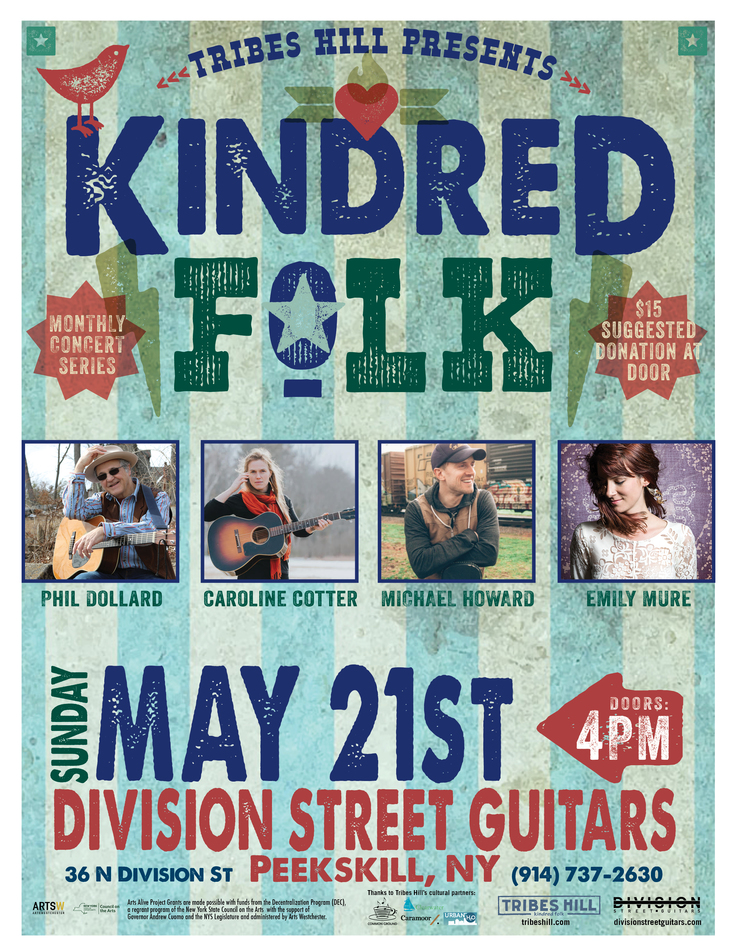 Tribes Hill presents our 2017 Kindred Folk concert series at Division Street Guitars in Peekskill. Get a set-up for your guitar, buy some strings, and catch the show. We hope to turn some new peeps on to our stable of talented Hudson River Valley Songwriters and welcome more new Indie Folk into the Tribe.

PHIL DOLLARD is an acoustic, blues-based guitarist and singer who has been performing at clubs and coffeehouses in Hudson Valley region for years. He writes original songs but covers artists from the 1930's through the folk/rock movement of the ‘60’s and beyond. Suitable for the roadhouse or the coffeehouse, influences range from Big Bill Broonzy to Hoagy Carmichael, Piedmont finger-picking of Rev. Gary Davis and Blind Willie McTell to the Delta slide of Booker White and Robert Johnson. Phil was a co-winner of the “Build-a-Song contest at Clearwater.org in 2015 on the subject of climate change. He has just released his second CD “Somewhere South of the Moon.”  http://www.phildollard.com/home.html

CAROLINE COTTER Portland, Maine based singer-songwriter, Caroline Cotter has played over 400 shows in 38 states and 6 countries since her debut album, Dreaming as I Do, released and reached #5 on the Folk DJ Charts in 2015. With a captivating soprano voice and award winning songwriting, Caroline's travel inspired songs take listeners all over the world: from a Parisian salon, to the coast of Maine, through the hills of Colorado, to the side of a bluegrass festival campfire, and into the depths of the human heart.

“Ms. Cotter’s new album is brilliant, the range of styles from a cappella to smooth vocals and jazz, back to folk harmonies – the album never ceases to surprise.” —Bruce Swan, WPKN 89.5 FM Bridgeport, CT
http://www.carolinecotter.com/

EMILY MURE, a NYC native and classically trained oboist, got her start as a singer-songwriter busking on the streets of Ireland. She has since shared the stage with notable musicians (i.e., Darlingside, Joe Crookston, The Bones of J.R. Jones and The Duhks). Emily’s lyrical melodies and voice take on a similar dark and reedy quality to that of her first instrument. Her songwriting has been recognized in prestigious national competitions (Falcon Ridge Folk Festival, Telluride Bluegrass Festival) and has been featured on networks including NBC, ABC and PBS. The honesty and vulnerability in Emily’s music will make you “want to go off into a quiet place and to be sure you capture each and every note.” —No Depression
http://www.emilymure.com/

MICHAEL HOWARD is a songwriter born and raised in the wilds of Alaska. Spinning “stand out folk songs” Michael brings energy, passion, and a “fierceness in his music” to each of his performances. Touring relentlessly around Alaska and the United States, Michael creates, “Catchy instrumentation that is stripped down and melodic, he takes you on a lyrical journey across the US in search of something that likely no longer exists.”
No Depression has this to say about his new album Gasoline Dream (self-released 8/12/16) “A Five-Star Folk CD”

“Remember the first time you encountered Steve Goodman, John Prine, Steve Forbert, Nick Drake, or Jesse Winchester? That’s how I feel listening to Howard —as if I’ve discovered the real deal, a one-of-a-kind singer who also loves words and knows how to put them together in memorable ways.” —album review by Jeff Burger
http://www.mhowardmusic.com/