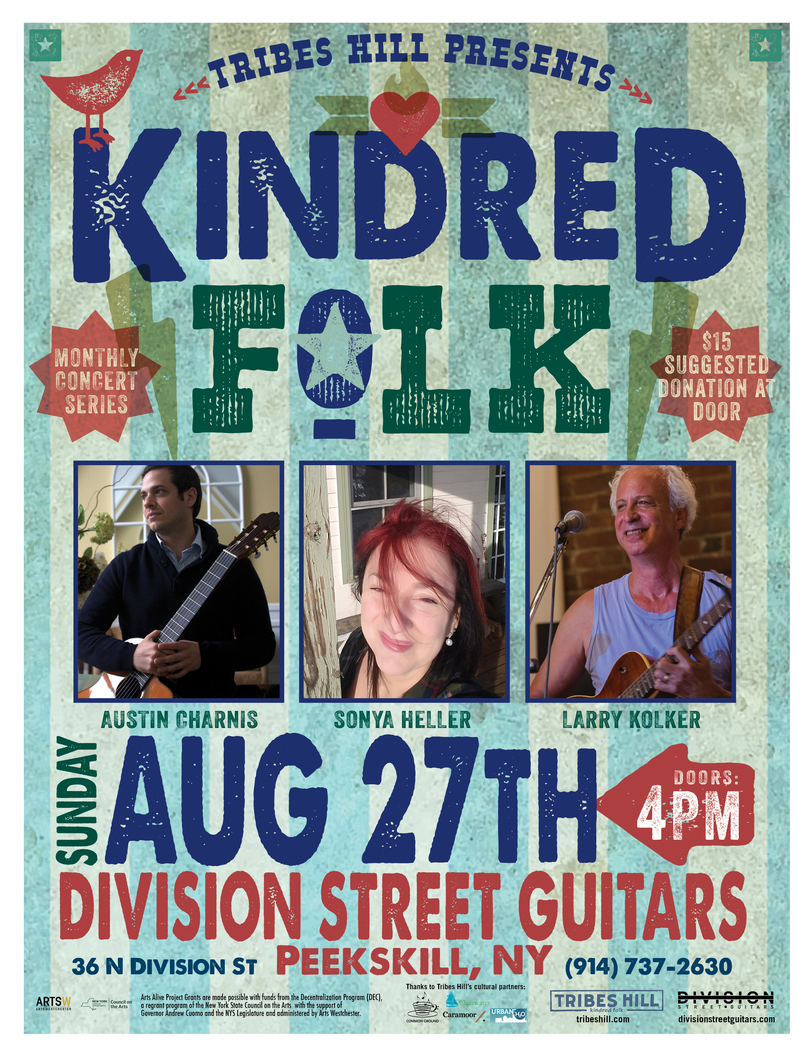 Tribes Hill Presents: Kindred Folk is back in action on Sunday August 27th, with an eclectic and entertaining bunch of fine folks who embody the spirit of the Tribes Hill music collective. With Sonya Heller, Larry Kolker, Austin Charnis.

Larry Kolker plays blues-based soulful folk pop rock, accompanied here by drummer Jeremy Kolker. Leicester Bangs Music Blog: “He’s certainly an all-round talent. He’s a distinctive vocalist with songwriting chops to match; an accomplished guitarist and blues-harpist..." He will be playing songs of love, loss, longing and other small challenges from his soon-to-be-released third album. Festival appearances include the 2015 KAABOO festival in Del Mar CA, the 2014 Tribes Hill Festival at John Jay Homestead, the 2013-2015 Borderline Folk festivals, the 2013 Huntington Folk Festival, the 2012-2013 Montauk Music Festivals, the Millennium Music Conference in Harrisburg, and the Bob Dylan Festivals at the Warwick Valley Winery. Most recently he was featured at the Christopher Street Coffeehouse Songwriters Circle show; he has performed at hundreds of venues. www.larrykolker.com

Austin Charnis is a classical and contemporary fingerstyle guitarist residing in Peekskill, NY. He received his Bachelor of Arts in Music Business from SUNY Fredonia in 2009, and studied performance with Professor James Piorkowski of the School of Music. You can find him performing anywhere from cafes and farmers markets to weddings and festivals. He is also the author of original guitar method books and for over a decade has been teaching beginners to advanced players how to play anything from classical to classic rock, and everything in between. His repertoire revolves around a wide variety of traditional and contemporary South American selections, but don't be surprised to hear rock, blues, and maybe a few jazz standards during the show. www.charnisguitar.com

Sonya Heller - Performing songwriter, composer of urban ballads. A native New Yorker who cut her teeth at NYC’s iconic Bitter End, The Living Room and the Knitting Factory in the footsteps of Joni Mitchell, Laura Nyro and Leonard Cohen, whose poetic genius sparked her very early on. Rolling Stone - "Sonya Heller is very much her own artist and comes alive onstage". Rootstime Mag - "...a singing and songwriting Joan of Arc, with a guitar in her hand and her voice as a weapon!" Crossroads Mag -"Listening to her, we settle down without further ado and let ourselves be carried away into the “atmospheric” universe of her voice." www.sonyaheller.com

Tribes Hill Kindred Folk Concerts are suported by a generous Arts ALive grant from Arts Westchester. Arts Alive Project Grants are made possible with funds from the Decentralization Program (DEC) , a regrant program of the New York State Council on the Arts with the support of Governor Andrew Cuomo and the NYS Legislature and administered by Arts Westchester.