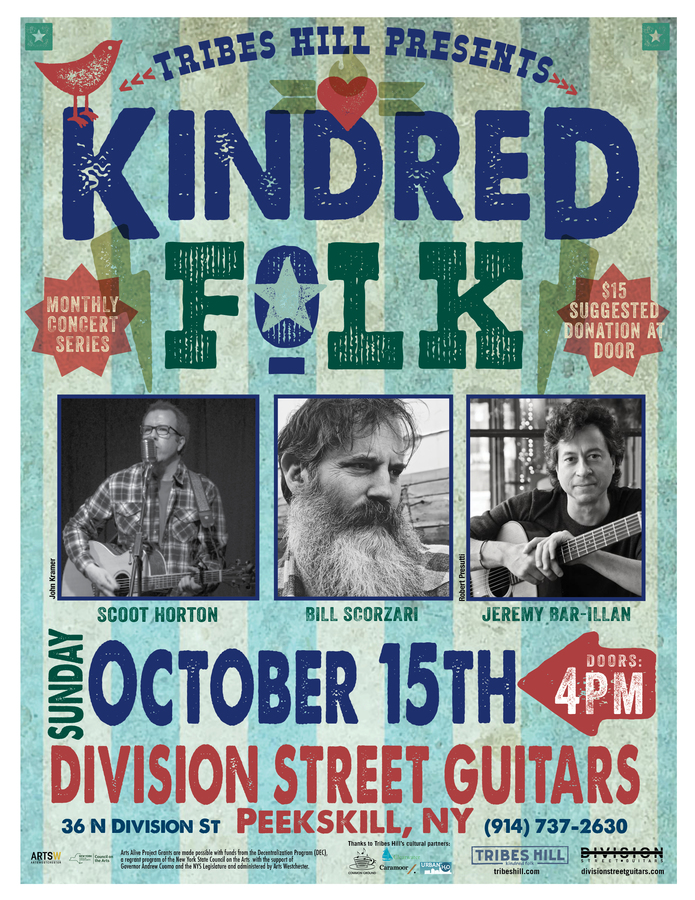 Coming up!!!! Here's another great line-up by Tribes Hill Presents Kindred Folk! Suggested $15 donation at the door for these 3 fine acts.

John Platt (WFUV) says of the artist and the album, "Bill Scorzari has a lived-in voice that says, 'Listen to these songs.' They spring from the earth and the ocean with an open heart and the wisdom of experience." No Depression calls Bill Scorzari "a force. His songwriting is stellar, his picking above par and his voice fits his songs perfectly."

We are lucky to present, Bill Scorzari, a New York based singer-songwriter, often likened to Sam Baker, Tom Waits, Bruce Springsteen and John Prine. March 10, 2017 marked the release of "Through These Waves," his second full-length record, produced by Jonah Tolchin (Yep Roc) and engineered, mixed, and mastered at the Bomb Shelter in Nashville, TN. The album features a cast of musicians including Joachim Cooder, Laur Joamets, Will Kimbrough, Chris Scruggs, Eamon McLoughlin, Jon Estes, Brent Burke, Kim Richey, Kyle Tuttle and Danny Roaman. In a recent interview, Tolchin calls Bill Scorzari, “one of the greatest songwriters I’ve ever heard.” With sincere and robust lyrics, Scorzari’s raspy vocals usher the listener breezily into his world.

Scoot Horton: “Old Punks Don’t Die, They Go Country” is not only a line in one of Scoot Horton’s songs, but it describes Scoot as well. After spending 20 years playing and touring in various punk bands Scoot unplugged his guitar and went acoustic, releasing his debut CD “Six 2 Seven” to positive reviews in 2015. Scoot spent much time in the New York City Hardcore Punk scene, some of that influence naturally comes out in songs like “Life and Hope” and “Bank Man.” And people have noticed. Scoot has been described as the Sex Pistols meet Woody Guthrie. Which makes sense because Scoot’s influences are Bob Dylan, Johnny Rotten, Joe Strummer, and the Carter Family. Scoot plays folk/ country as he hears it and what he writes comes with
an edge. He calls it Outlaw Folk.

Jeremy Bar-Illan is an award winning guitarist, music composer and producer. Having received tremendous acclaim for his blues guitar work, he is often compared to the likes of Eric Clapton and Jimi Hendrix. His new album "Diggin' In!" is now available at all digital outlets, iTunes and Spotify.

In 2015 Dragonfly 13 received the award for best funk song from Akademia Music Awards. In 2014 Jeremy was presented with the President's Volunteer Service Award for his work with non-profits with music as a focus. He has been volunteering with Musicians On Call since January of 2011 with over 300 bedside performances donated. He is the founder and director of a non-profit organization, The Purple Hat Foundation, which is a conglomerate of volunteer musicians who perform benefit concerts to raise awareness and funding for pediatric cancer patients and related programs. He has also volunteer performed for Bread & Roses on the West Coast. Through these efforts, he lives his belief that music is a bridge to all of mankind and the universal language which can be harnessed to help create a better world.​

"Jeremy Bar-Illan gets his music into your very soul with a guitar tour de force on his fantastic new album, Diggin' In!" - Dave Bull CBFM

Jeremy is also the founder and music director for the hit funk band, Dragonfly 13 - a nine piece funk and R&B orchestra. Their new album, "Let the Music Bring You Back" is available at all digital outlets.