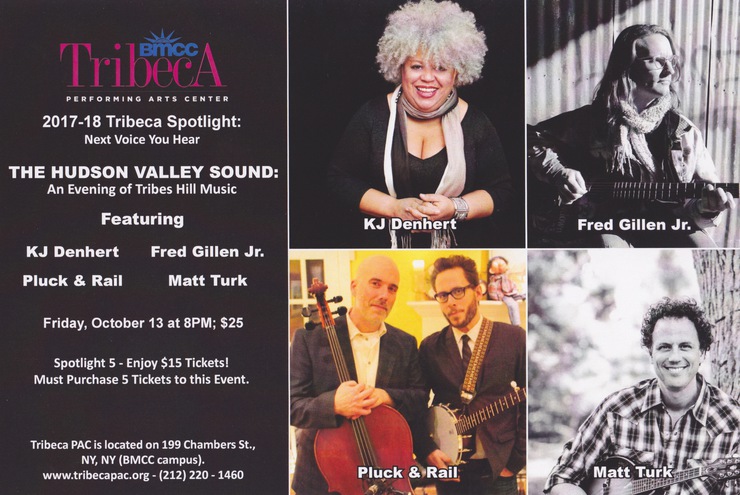 Pluck & Rail is the acoustic intersection of Andrew Sussman of the prog-rock heavyweights, Frogg Café, and George Gierer of the folkabilly band, South County. George bought his first guitar at age 17 and moved to Austin, TX, where he soaked up the sounds of the south and was forever changed. After hearing hearing Eddie Van Halen at the age of 15, the classically-trained cellist Sussman starting spinning Bach into the blues and Beethoven into Zappa. Pluck & Rail’s Trigger is an eclectic song series telling tales of misfits and mishaps that would make Tom Waits smile. A rare acoustic album that navigates the waters of folk, blues, country and sometimes punk, George and Andy harmonize and sing of the darker side of life: bodysnatching, addiction, divorce, hospitals and graveyards.

Matt Turk is a veteran performer who has engaged audiences around the world, both as a rocking bandleader and an acoustic folk troubadour. He has shared the stage with Pete Seeger, opened for Judy Collins, The Doobie Brothers, Fiona Apple, The Grateful Dead’s Mickey Hart, Dr. Ralph Stanley, Keller Williams, David Bromberg, Ellis Marsalis, Del McCoury, Colonel Bruce Hampton and more. He has performed throughout the USA, Europe, Israel and the Caribbean, appearing at festivals and venues including Clearwater’s Great Hudson River Revival, Caramoor’s American Roots Festival, the Gathering of the Vibes, Atlanta’s Music Midtown, Jazz at Lincoln Center, The Beacon Theatre and Brooklyn Bowl. In 2014, Matt released Cold Revival, produced by David Dobkin, also a filmmaker, best known for directing “Wedding Crashers” and was recorded in Los Angeles at Matter Music. Rust Magazine named it 2014 Album of the Year. In 2015, Matt co-founded Deadgrass with Grammy award winner C Lanzbom celebrating the music of Jerry Garcia.

Fred Gillen Jr is a singer/ songwriter, producer, and multi-instrumentalist from New York’s artistically rich Hudson Valley. In his songwriting and in performance he has never been afraid to take on controversial or politically-charged topics, and he seamlessly incorporates folk, punk, rock, spoken word, country, and Americana styles into his music. 2017 brings the release of his 10th full-length, independent album, “What She Said.” Gillen began his music career in the late 1980’s as a bass guitarist with New York metro area bands, performing at legendary NYC venues such as CBGB, Mercury Lounge, Irving Plaza, and the Lonestar Roadhouse. An extremely prolific songwriter, Gillen’s material covers a wide range of topics, but tends to lean towards social commentary. His nine previous solo albums and two albums with Hope Machine have received radio play and glowing reviews all over the world. His songs have also been featured on ABC-TV’s “All My Children,” MSG Network’s “NYC Soundtracks,” NPR’s “Car Talk,” the CMJ “Music Marathon” album, and Folk Alliance’s “War and Politics” album.  He has opened for a wide variety of artists including Merle Haggard, David Bromberg Big Band, Todd Rundgren, and Fred Eaglesmith, and he has performed on stage with Pete Seeger, Peter Yarrow, Tom Chapin, John Hall and other great folk and rock artists.

KJ Denhert’s performances move you to laugh, to dance and even to cry. Her voice is powerful, lyrics full of intelligent insight, and her musicianship impeccable. KJ Denhert is an award-winning singer-songwriter and bandleader who made a name for herself around the world and at home in NYC. KJ’s ten albums earned her 7 Independent Music Awards. In 2009, she was named as one of JAZZ.COM’s top female vocalists. KJ has been an artist in residence 11 times at Italy’s Umbria Jazz Festival since 2006. Today she stays relevant to blues, jazz, singer songwriter and folk music winning awards in myriad categories. KJ defines herself as an “urban folk and jazz” artist, however, she often steps outside that box to explore other genres that have influenced her.