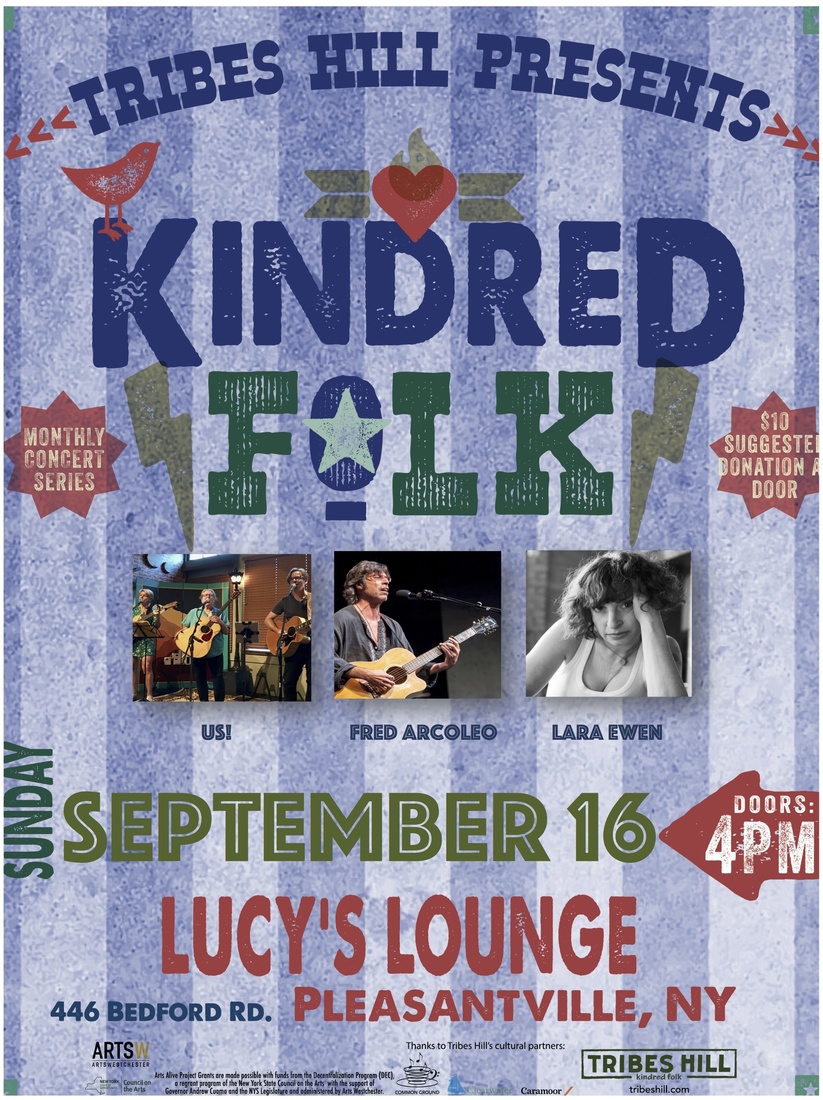 
Us! is what happens when three “seeker” singer songwriters join their eclectic talents and musical influences to create a sound that is infectiously harmonic, delicately robust, and full of unexpected twists and turns.

New York based Judy Kass, quickly draws in her audience with soulful vocals, no-nonsense lyrical storytelling and genre-bending exploration of guitar and piano. Her award winning original music blends generous amounts of folk, jazz and blues with songs that cover the full gamut of mood and experience. Judy’s 2014 debut album, Better Things and her recent release, Beyond the Ash and Steel (2016) both received notable airplay, topping Folk and Roots radio charts for months after their release and appearing on the Folk DJ List of Top Albums. www.judykass.com

Amy Soucy is a Beacon, NY-based contemporary folk chanteuse who writes evocative songs exploring the kaleidoscope of human experience (dreams, longing, forgiveness and healing) and sings them in a voice that’s been called “powerful,” “comforting,” and “angelic.” In 2016, she was selected for a coveted spot in the Emerging Artist Showcase at Falcon Ridge Folk Festival, and took home first prize in the CT Folk Songwriting Competition. www.amysoucymusic.com

Brooklyn-based singer/songwriter Lara Ewen tells stories, most of which are true. The semi-autobiographical nature of her work blends both the real and the imagined, and the musical landscape she navigates dips into country, Americana, and singer/songwriter influences, drawing comparisons to musicians who sometimes get summarily lumped into the folk category, such as Patty Griffin, Lucinda Williams, John Prine, and Jonatha Brooke. Her third and most recent album is titled The Wishing Stone Songs, and all her albums are available physically and digitally through Bandcamp and CD Baby, and digitally through iTunes, Spotify, and most online outlets. www.unstrungmusic.com

Fred Arcoleo’s “Rally Folk Music” aims to challenge, inspire, and incite engagement with the struggles of our time, to open our hearts and minds—through music—to our common interests in a sustainable world, and to our exquisite potential for growth and change, both in ourselves, and in our society. In the words of the elders of the Hopi people: “We are the ones we’ve been waiting for.” A 2012 Connecticut Folk Festival Song Competition winner, he lives and works in New York City, where he is a high school English teacher at George Washington High School Campus in Washington Heights. His first award-winning CD is entitled “SEEDS.” He is currently working on his next album. "Don McLean meets Phil Ochs." - Pat Lamanna, People's Music Network. www.reverbnation.com/fredarcoleo