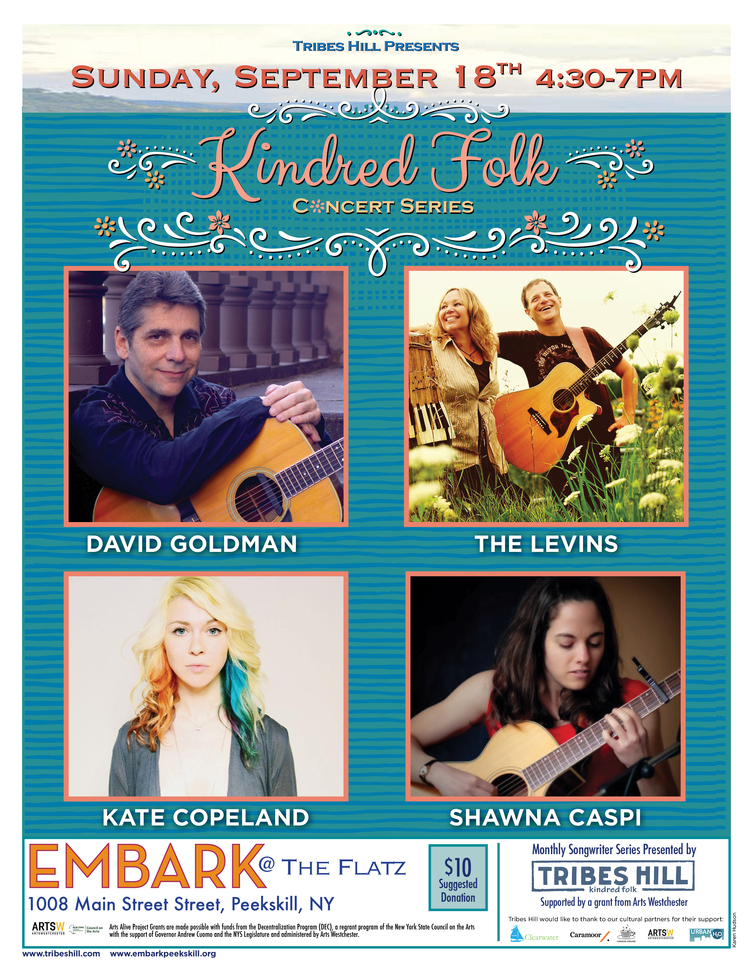 DAVID GOLDMAN
“Few people on this earth were born to sing, but lucky for us, David Goldman is one of them.” —Christine Lavin
David Goldman is an award-winning & world-traveled multi-lingual singer/songwriter who performs in a wide variety of genres, including Blues, Latin, Acoustic Folk Rock, Pop/Jazz and World––all with heartfelt vocals. He has opened for Kenny Loggins at Tarrytown Music Hall and Andy Statman at Irvington Town Hall Theatre, and has performed at the Pleasantville Music Festival Main Stage, Paramount Theatre in Peekskill, Tribeca Arts Center and many other venues. His CDs have received extensive national and international radio airplay. His latest release, “Going To America” won the Gold Prize in the 2016 Folk-Rock/Americana category of the 32nd Annual Mid-Atlantic Songwriting Contest.  www.davidgoldman.com

THE LEVINS The harmony-driven acoustic duo, The Levins, offer music that is warm and uplifting without skating over the complexities of life.   Guitar, piano and voices provide a full sound with unexpected harmonies and unique arrangements. Their albums have garnered invitations to collaborate and perform nationally and in Amsterdam and England. The 2014 Falcon Ridge Emerging Artists’ first official release, “My Friend Hafiz”, was selected by John Platt, WFUV as a top 10 CD of 2013 and their most recent release, “TRUST” hit the Top 10 on the Folk DJ charts Spring, 2015. www.thelevinsmusic.com

KATE COPELAND is a singer/songwriter composer/arranger based out of New York City. A graduate of Oberlin Conservatory's composition program, she has worked both in and out of the studio in many capacities with artists including Doug Wieselman, Abakis, Doug Goldstein, Mike O'Malley, and Zach Comtois. She released her first solo album, "recollection room," in June 2015, and her follow-up EP "Red and Blue" in May 2016.
"... one of the most versatile, heartfelt and honest singer-songwriters...Kate's sincerity is completely refreshing...a gem of musical discovery." —Meander Blog www.katecopelandmusic.com

SHAWNA CASPI is a guitar-picking, classically-trained folkie with a sweet-tooth for a good story, a sly lyrical wit, and a rich, powerful voice. Shawna Caspi sings of love, travel, home, and heart, distilling each experience into a series of vibrant snapshots, coloured with humour and grace and arranged with care and craft. Her latest release, Apartments for Lovers, is a solo guitar and voice album that showcases her rich voice and remarkable fingerstyle guitar technique.  www.shawnacaspi.com