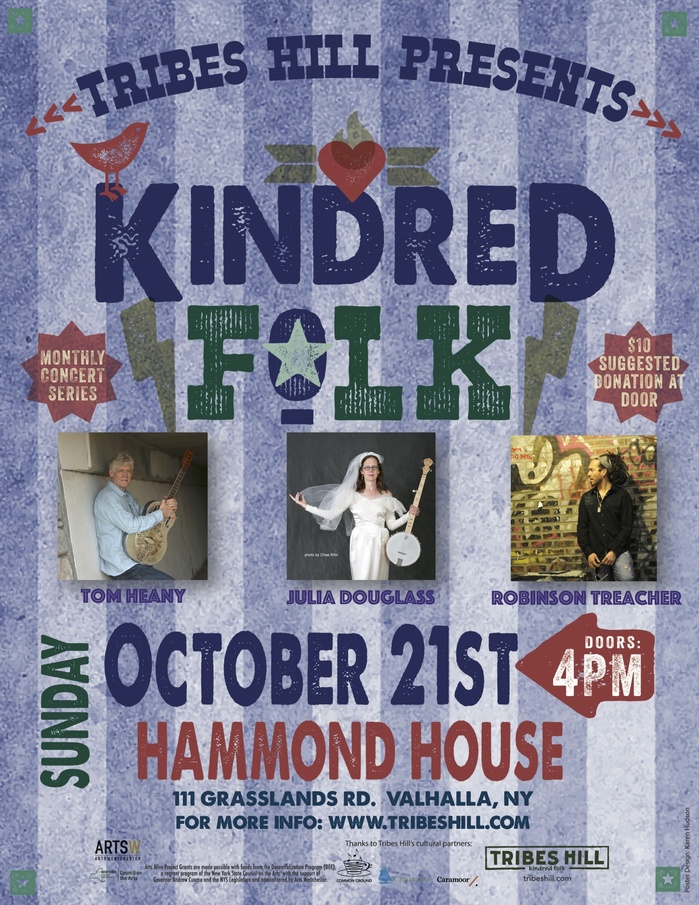 Tribes Hill Presents Kindred Folk, bringing you the best in singer songwriter talent. Proud to be partially supported by an ArtsWestchester ArtsAlive grant.

The series is at the Hammond House for this show only. Next month we will be moving to The BeanRunner Café in Peekskill.

We're very excited about this more intimate, unplugged (Yay!) setting. This house concert will feature a potluck, please bring food or drink to share. Because of more limited seating, we are asking folks to RSVP. Please email Rick at fmrock@live.com to reserve seating.

One of the earliest surviving colonial farmhouses in Westchester County, Hammond House was built in 1719 by Capt. William Hammond, a Philipse Manor tenant. Col. James Hammond, a younger son of William, commanded the Westchester Militia during the Revolution. Owned since 1995 by Rick Rock, founder of Tribes Hill, Hammond House has hosted concerts by such renowned artists as The Kennedys, We're About 9, Girlyman, Joe Crookston, Pete Seeger, Terence Martin, Jack Hardy, Maggie & Terre Roche and Gandalf Murphy & the Slambovian Circus of Dreams.

Tom Heany is a songwriter and guitarist from the Hudson River Valley in New York. His songs call to mind the traditional music of the United States, the classic songs of the '30s and '40s, and the stories we tell when families get together. His CD Reservoir was released in 2018. It's easy to hear Woody Guthrie, Stan Rogers and Paul Brady in his songs (and a little Chuck Berry, too), and Mississippi John Hurt in his guitar playing. Before turning his hand to songwriting, he spent years studying the songs of Jerome Kern, Rodgers and Hart, George and Ira Gershwin, Irving Berlin, Cole Porter and their contemporaries. He says, "Most of what I know about harmony comes from those great old tunes." Tom is also the author of First, Learn to Practice and Practicing for Parents. www.tomheany.com

Robinson Treacher has been featured on Sirius/XM's "The Loft: Live from The Living Room" series, the WFUV "Sunday Breakfast", and has shared the stage with such notable artists as Vince Gill, Iris Dement, GE Smith, Joan Osborne, Cheryl Wheeler, Amy Helm and Carrie Rodriguez. He has even been touted by legendary songwriter Don Schlitz ("Forever and Ever Amen", "When You Say Nothing At All", "The Gambler") as being, "...impossible to follow in concert." His passionate approach to music has garnered him some real attention as of late. His latest EP, "BORN" just won the 2018 Independent Music Award for BEST EP (Roots/Americana/Singer Songwriter). He has been nominated for a Nashville Music City Award for his song "This Bar" as well as for an NSAI/CMT country music People's Choice Award and an Independent Music Award nomination for his song "Long Day Good Night". He is a staple on the folk music touring scene, regularly featured at NERFA, the Kerrville Folk Festival, Falcon Ridge Folk Festival (Emerging Artist), Connecticut Folk Festival, New Jersey Folk Fest, Cape May Folk Fest, Key West and Key Largo Folk Fests and has been a two time recipient of the Audience Choice Award at Virginia's famed Lyrics on the Lake Festival. Robinson has recently been spotlighted by the Rhode Island Songwriter's Association (RISA) along with the Philadelphia Songwriter's Project with award nominations as well and is currently supporting his upcoming release "Born" with shows in NYC, Nashville, and all points in between. www.robinsontreacher.com