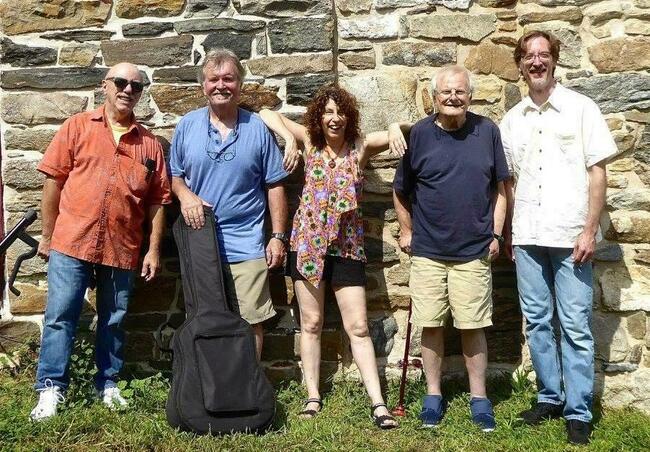 
All Wheel Drive are:
Pete Tamburrini, born in Motherwell, Scotland and hailing from Dutchess county New York, like many a teen inspired by the Beatles, picked up a guitar and played in bands during high school. He put his instrument aside for a while when life got in the way but his passion for music never waned. He has since made up for lost time and he loves writing, singing and playing music with this band.

Iris Cohen, a Westchester county local, is an accomplished singer/songwriter in her own right and some of her compositions are featured in each performance. As a performer, sound engineer, producer and co-founder of Tribes Hill, Iris has been involved in the local music scene for years. That history can be heard in her superb and heartfelt vocals, fabulous harmonies and tasty percussion which are integral parts of the band.

Allan Paul “Country Al” Ross, born and bred in Southern California, is a lifelong clarinet player and adult-long guitarist. As a jingle writer, whose high water mark was doing a campaign for STP with Johnny Cash, has also done film scores, and would do one now if anybody asked him. After college at Berkeley, CA, where he majored in rioting and bluegrass, Al got to play a set with Bill Monroe at a club in Los Angeles as well as playing with Gerry Garcia and Janis Joplin and others during that time. His younger of two sons called him an "aging hippy". The aging hippy lives in Westchester with his tolerant wife, Marion.

Buddy “Pleasant Bud” Coughlin, a New Jersey native with detours to South Dakota, California and ultimately landing in New York, studied guitar with Emil DeCosmo, educator and master of the jazz saxophone. He played his first bar at the age of 14 in Jersey City. He's been writing songs and playing longer than he cares to say and has played from coast to coast (even in a Dublin pub) with various bands and solo in club dates, recording sessions, college shows, dances etc. He once played a show in Santa Barbara where he was paid with a bag of peanuts. REALLY! PEANUTS!

Jonathan Donald grew up in Dobbs Ferry. A lifelong amateur musician, his musical journey began at age five when he began studying violin.His world changed when he acquired a guitar at age thirteen, and his obsession with guitar music began. He has performed at various one-off events around the county, but his main focus has been writing and recording instrumental music at home. His most notable performance was playing Radiohead at a mustache competition in front of a panel that included Wally Bachman and Paul Feiner. He is excited to be playing with other musicians again as a member of AWD.