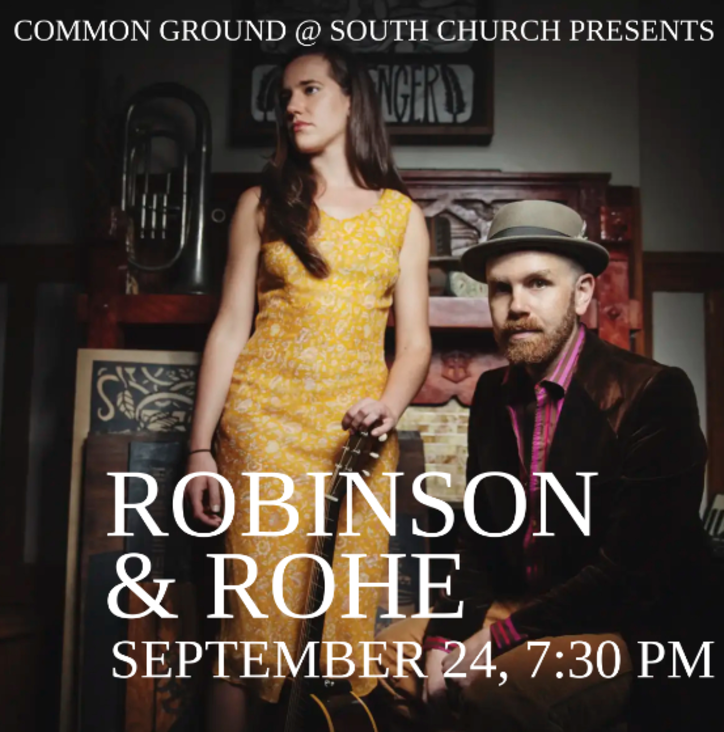 In a recent interview on the Ezra Klein Show, the singer-songwriter Allison Russell talked about the physiological and neurological impact of music. "Listening to music can change our biochemistry... and slow down our heart rates, or speed it up," stated Russell, who performed at a Common Ground concert with her group Birds of Chicago back in 2018. There’s a highly, highly heightened version of empathy where we can feel things together at the same time, which is rare — very rare, I think, now. Especially in our modern culture, there are very few places of public assembly anymore where we are having a shared kind of emotional journey together."

As we get set to open our 20th Anniversary season, it's my hope that Common Ground Concerts has helped foster some of that shared musical empathy. For that reason, I can't think of more fitting artists to kick of our platinum year than Robinson & Rohe.

Robinson & Rohe is the duo of American songwriters Liam Robinson (banjo, accordion, vocals) & Jean Rohe (guitar, vocals). Since the release of their debut record, Hunger, in 2017, they have taken their music all over the US, Switzerland, UK, and Ireland, lighting up venerable folk venues and festivals and opening for Tom Paxton and Anaïs Mitchell along the way.

After a touring hiatus in 2019, during which Liam served as vocal arranger and music director of Anaïs Mitchell’s smash hit Broadway musical Hadestown and Jean released Sisterly, an award-winning record of her own, Robinson & Rohe are set to release a new collection of songs, Wait & See, in 2022, showcasing their skill as producers and arrangers.

In addition to his central role in the success of Hadestown, Liam was an original cast member of War Horse on Broadway. Jean is a 2022 Brooklyn Arts Council grant recipient. Her record Sisterly won Best Adult Contemporary Album at the 2019 Independent Music Awards. She is perhaps best known for her video single, “National Anthem: Arise! Arise!” an unflinching alternative national anthem which has now been performed and recorded by scores of choirs and artists across the US. Robinson & Rohe live in Brooklyn, NY.