A new concert series builds on the themes of restoration and independence. 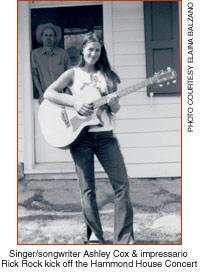 When Rick Rock purchased Hammond House, he never dreamed that it would become the home of a brewing musical community. He and his brother were simply interested in saving a historic landmark. "I wasn't looking to start something. I was just looking for a place to live," Rock recounted recently. "I guess we needed the house and the house needed us."

The main part of the house pre-dates the American Revolution. Local legend has it that Hammond House may have been a stop on the Underground Railroad. And now with the house in the process of being restored and refurbished, it is the site of a new concert series that also continues to build  on the themes of restoration and independence.

The interior of the house is close to being fully restored and exudes a welcoming aura. The kitchen, which dates back to 1719, is a big room with a tremendous stone fireplace. The room hearkens back to bustling family mealtimes and by design still invites a gathering of family and newfound friends. It wasn't long before Rock was hosting impromptu get-togethers. Get-togethers turned into parties, and when your circle of friends includes a bunch of musicians, parties have a way of turning into hootenannies. The hootenannies started attracting more and more people, and soon they were preceded by potluck barbecues. The next logical progession, it seemed, was for these organically grown gatherings to continue to grow into a series of house concerts.

Over the kitchen fireplace hangs a sign that reads "Tribes Hill." Rock explains that sign is from the part of the Eerie Canal where Native Americans came together to work on the canal. "It goes with the principle of what we're trying to do here with the concerts," he explained. "Bringing all the people here to one meeting place."

The series' maiden voyage will take place on Mother's Day. The first show of the series is a showcase of independent singer/songwriters and is aptly titled "Mother Music." Syracuse artist Ashley Cox comes from a musical family. Her father is a noted jazz pianist in central New York and, serendipitously enough, her mother's maiden name is Music. Cox is, in effect, the mother and certainly the energy force behind the showcase. "When I started out [in Syracuse] I was just a girl with a guitar and no one else was doing what I was doing," she said.

Cox found that being different set her apart in a good way and her uniqueness made it easy for her to find gigs. "I got really good response," she added without an ounce of ego. Cox's straightforward and enthusiastic spirit took Syracuse by storm; she soon found fellow musicians to help along the way."It got to the point where the only way I got to see [another performer] was if we played together," she said. And out of her desire to open the way for other musicians, Cox created a networking community to aid emerging artists like herself. "I get e-mails from Australia now saying, 'I hear you help artists get gigs,' " she recounted.

Carroll has been strumming and drumming her way around the folk circuit for the last several years and is beginning to get some of the recognition she deserves. When she's not flying solo through local coffeehouses and other folk-friendly venues, you're likely to find her thumping away on her djembe and singing back-up for the likes of Pete and Maura Kennedy or opening for Greg Greenway. Carroll's sweet, breathy soprano and penchant for harmony make her a delightful addition to whatever project she chooses. When she takes the stage alone, her demeanor is open and friendly. In true folk tradtion, she'll often enlist the aid of her listeners to jump in with a little audience participation. Her lyrics are intensely personal and her selections that are not strictly autobiographical still radiate the same degree of intimacy.

AnnMarie Milazzo recently parted ways with her band House of Red, and while the divergence of paths can be in many ways difficult, the upsets and the curve balls are often the things that make us stronger. Listening to Milazzo conjures aural hallucinations of a Patty Larkin-Kate Bush hybrid. On first listen, one is tempted to comment on her pop sensibilities, but interesting arrangements and a closer listen to her lyrics bring Milazzo back to a more down-to-earth plane. And while that voice of hers could kick some pop diva's ass, Milazzo's message takes a more spiritual and ethereal route without losing itself in the clouds.

Dropping in from her Canadian tour, Andrea Florian brings her own feminine energy to Mother Music. Florian possesses a clarity that is apparent with every note she sings. Unlike the droves of young songwriters who shamelessly imitate Ani DiFranco, Florian has found her own sound. She's inspired by Ani, to be sure, but Florian also cites among her influences artists like Radiohead, Peter Gabriel and Shawn Colvin. With her feet planted firmly on the ground and a voice that floats easily on the breeze, Florian is a welcome addition to the Hammond House's inaugural concert.

Hostess Ashley Cox rounds out the line-up with her own brand of edgy folk-pop. From the sparse instrumentation that becomes a solo artist to eccentric-but-appealing arrangements and the addition of a band, Cox is another one of those songwriters who speaks from the heart.