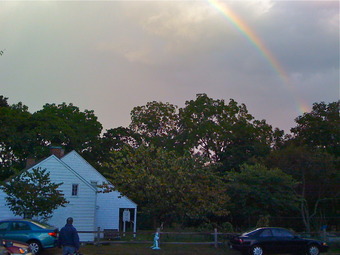 Whether you're coming from New York City or elsewhere in Westchester, you can get to Hammond House on public transportation. From Manhattan, take the Metro North Harlem Line service from Grand Central Station to the White Plains Transit Center. From there, take the no. 40 or no. 41 bus. Get off the bus at the stop at the intersection of Woods Road and Grasslands Road (just before the Westchester Medical Center). Follow Grasslands Road down the hill and you'll find Hammond House on your right (approx. 600 yards). Westchester County Beeline Bus schedules and maps are available at www.beelinebus.westchestergov.com.

The History of Hammond House

One of the earliest surviving colonial farm houses in Westchester County, Hammond House was built in 1719 by Capt. William Hammond, a Philipse Manor tenant. Col. James Hammond, a younger son of William, commanded the Westchester Militia during the Revolution. He has been described by some local historians as "a sort of Westchester Paul Revere," riding off from the house to alert his troops. Legend has it that Washington visited the house for a conference with the Colonel probably in the summer of 1780, with only two or three aides and left a few minutes before the house was surrounded by Tory troops. Hammond was taken prisoner and held on a prison boat in the Hudson until he was released about one and a half years later. New evidence supplied by the 2nd Reg. Light Dragoons supports this story. They even go further to suggest that the Hammond House was frequented by Washington and his troops and used as a military camp.

The Hammond House is remembered by many as a local museum which began in the late 1920's. When the Westchester County Historical Society changed it's focus to archival preservation and resources, the building was sold to New York Medical College and was converted into a laboratory. Although it has been on the National Register since 1976 the house's survival was precarious. It was purchased by Frederick and his brother, Michael Rock in 1995 when the house was being threatened by the possibility of being dismantled. It is currently being restored to much of its original character. It is hoped by both that they can share this National Landmark with the community once again by conducting various arts and history related events.

House concerts have become the hit of the acoustic world as they can be presented just about anywhere with a minimum of set-up (no sound system, etc.). They've been cited by the New York Times and other publications as a major cultural phenomenon. If you're interested in hosting a concert or want more information on how such a show works, drop me a note or try visiting [link] for informative articles on the subject.