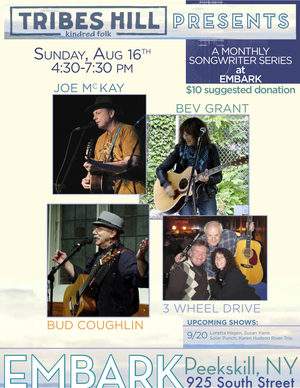 Tribes Hill Presents: Kindred Folk, is a monthly concert series featuring some of the best singer/songwriters and musicians that the Hudson Valley (and beyond) has produced, at the EMBARK | Peekskill performance space, every third Sunday afternoon. With performances by acclaimed songwriters from Tribes Hill membership and beyond, the audience support has been enthusiastic.

Bev Grant is a contemporary folk veteran, a topical songwriter with heart and edge, telling life stories that celebrate South African grandmothers on a soccer team, salute a solitary old man who just won’t leave his mountaintop in West Virginia, the trials of living above a crazy neighbor, and the personal feelings about failed relationships.
www.bevgrant.com

Joe McKay is a true NJ original. Joe’s music is deeply rooted in the late fifties and early sixties folk revival. The music of the Kingston Trio, the Limelighters, Bob Dylan and singer/songwriter John Stewart contributed to his traditionally based unique, storytelling style.
www.brjoe.com

Bud Coughlin states: "Studied guitar with Emil DeCosmo, a master of the jazz saxophone; Played my first bar at the  age of 14. Jersey City. I’ve played for folks from coast to coast, even once in a Dublin pub and always been well received. Once played a show in Santa Barbara where I was paid with a bag of peanuts. REALLY! PEANUTS! I Did tech work for all the big stars through the 1980’s where I discovered the weekly paycheck."
www.pleasantbud.com

3 Wheel Drive consists of Iris Cohen on vocals, percussion & guitar, “Country” Al Ross on guitar & clarinet and Pete Tamburrini on guitar, vocals & whatever else comes up. Their musical performance runs from Al’s friend and mentor Doc Watson’s guitar tunes, to standards, contemporary covers, and originals. Enough to keep the most discriminating listener interested and entertained.