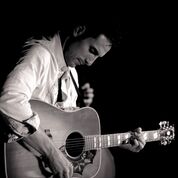 Griffin Anthony is a New York native who got his start in 1995 as the drummer of The Ripptides, whose members included children of legendary musicians Arlen Roth and Alan Menken. As a teen, Griffin worked backstage at the Newport Jazz & Folk Festivals, before emerging as a performing songwriter, debuting with his self-titled EP in 2007 and later signing with with BMI and Orange Music Publishing in 2008.   He just released his latest LP “The Making of a Man”.   He’s performed at over 2,000 venues, including major music festivals such as Wanee, SunFest, CMJ, and Art Basel, while his ever-expanding catalog has garnered placements on ABC, HBO, NBC, MTV and CBS to name a few. In 2011 he won “Best Vocalist” at the International Music Festival and saw over 200 national tour dates. In October 2012, Griffin was commissioned by the SPCA to compose for their annual adoption campaign. An animal lover himself, Nobody Loves Like You came to fruition overnight. The song was soon recognized as one of 3 international finalists for “Best Original Music” at the 2013 New York Festivals: Film & TV Awards.   For more information, visit www.griffinanthony.com

Steve McGrath, a Connecticut River Valley native, grew up in Cromwell with a natural love for music.  As a young adult, Steve rose up through the Middletown music scene performing solos and fronting cover bands.  He perfected his love of writing both music and lyrics, and over the years has recorded many collections of original music, in addition to a busy schedule of solo and band appearances that feature his unique take on many popular and obscure cover songs that could be described as blues-rock.  He can be seen all throughout Connecticut, from coffee shops to State Fair Center Stage to Mohegan Sun. For more information, visit www.Steve-McGrath.com.

Danny and Caroline's songs feature catchy melodies, and insightful lyrics infused with hints of jazz, bluegrass, folk, and soul. With Danny on Guitar and Caroline on keyboard, they combine their two distinct voices in beautiful harmony, producing a sound is recognizable but at the same time refreshingly unique and diverse. Their first collaboration "Better Days" in 2013 was featured in a Coca Cola advertisement promoting the Olympics games in Russia, and earning the duo some international exposure.  Danny and Caroline have 3 EPs available now on I-tunes, and their first full-length album is set for release in 2015. You can catch them playing live in and around New York City. For more information, visit www.dannyandcaroline.com.