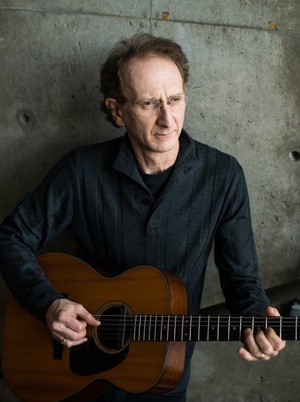 Groovin’ in New Fairfield is proud to welcomes TERRY ROBB with special guests Lauren Sheenan and Danielle Miraglia on Saturday, November 12 at 7:30pm, at the New Fairfield Senior Center, 33 Route 37, New Fairfield, CT. Tickets are $10 and doors open at 6:45 pm.
TERRY ROBB is one of the top acoustic blues guitarists of our time. His signature
fingerpicking style has earned him international acclaim from worldwide audiences,
music critics and his distinguished peers. Incorporating elements from the Mississippi
Delta music tradition, ragtime, country, swing and free jazz, Robb has built a unique
blues sound that has made him a legend in his over 40 year music career.
Robb has been inducted into both the Oregon Music Hall of Fame and the
Cascade Blues Association Hall of Fame. He singlehandedly defined the Muddy Award
for Best Acoustic Guitar, winning the honor over 19 consecutive years from 1992 until

“Terry Robb Best Acoustic Guitar” Muddy Award to honor his landmark contributions to
blues music. Robb was born in British Columbia, raised in the United States and currently resides in Portland, Oregon. He achieved greatness at an early age, performing with Ramblin’ Rex of Frank Zappa / Captain Beefheart fame, Canned Heat’s Henry Vestine, and steel string
guitarist icon John Fahey. At age 24, Robb’s collaboration with Fahey included producing several of his critically acclaimed recordings including “Let Go”, an album which Rolling Stone gave four stars and named one of the top three of the year in 1984. As an acclaimed producer and session guitarist Robb has contributed to many Award-winning projects, including Alice Stuart’s Grammy and W.C. Handy nominated album, “Can’t Find No Heaven”. He went on to collaborate with Eddy Clearwater, Maria Muldaur, Ike Willis, Curtis Salgado, Glen Moore, toured with Buddy Guy and Steve Miller, and performed with B.B. King, Albert Lee, Joe Cocker, Robert Cray, Leo Kottke, Rick Wakeman and more.. www.terryrobb.com
Roots musician LAUREN SHEENAN begain her recording/performing career in 2002 and has been sailing on to critical acclaim, national/international radio charts and “encores” at festivals, concerts and venues across the country and in Canada. From fronting a 9-oieces band to solo acoustic work, this vivacious “songster” delights audiences with the breadth of her material, evocative artistry and musicianship. Recent appearances on NPR, four CD’s that charted in the top 20 on folk radio, a 2012 Portland Music Award for outstanding achievement in Folk, are some of the many accomplishments that attest to her growing significance as an artist, performer and teacher. www.LaurenSheenanMusic.com
DANIELLE MIRAGLIA comes armed with a strong steady thumb on an old Gibson, an infectious stomp-box rhythm and harmonica with tunes ranging from heart-felt to socially conscious that will move both your heart and hips. On her latest "Glory Junkies" she's joined by a killer cast of musicians blending the classic rock vibe of The Rolling Stones and Janis Joplin with Danielle's signature lyrical ability to explore human nature at its best and worst. Danielle was nominated for a 2015 Boston Music Award for Singer-Songwriter of the Year. Danielle has toured and played major venues across the United States and beyond, and has shared the stage with the likes of Johnny Winter, Bettye Lavette, John Hammond Jr., Joan Osborne, John Mayall, Sonny Landreth, John Oates, Colin Hay, Robert Cray, Rodney Crowell and many more "Straddling the line where folk/roots meets rock/blues, Miraglia has a voice that can go from a raspy come-hither purr to an Etta James-esque powerhouse belt, although she may be best known for her lead thumb — a heavy, thumping strike on her Gibson that’s backdrop percussion in itself." - Lauren Daley - The Boston Globe www.daniellem.com
Advance tickets can be purchased at the New Fairfield Senior Center or by mail. Payments made my mail should be payable to Groovin’ in New Fairfield, c/o New Fairfield Senior Center, 33 Route 37, New Fairfield, CT. 06812. Please allow sufficient time when mailing. All sales are final. Tickets can also be purchased at the door, pending availability. Additionally, a moderately priced dinner catered by Bruno’s Restaurant is offered before the show. Choices include: eggplant rollatini, chicken francese, pizza, coffee, tea, hot mulled cider, water and homemade desserts. For additional information, contact us at grcoffeehouse@gmail.com.
About Groovin’ in New Fairfield: Groovin’ in New Fairfield seeks to develop and promote ongoing, regularly scheduled live music programs in New Fairfield and surrounding areas. It is a non-profit organization supported by sponsors, local businesses, grants from charitable organizations and patron donations and is staffed by volunteers. It operates under the New Fairfield Parks and Recreation Commission. www.groovininnewfairfield.com