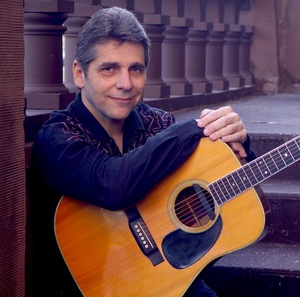 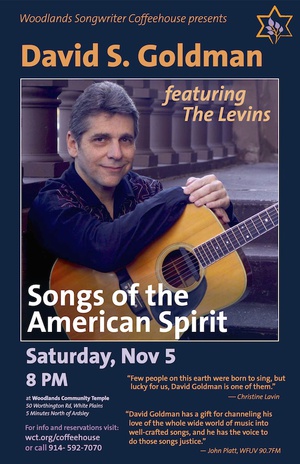 The idea for “Songs Of The American Spirit” arose out the inspiration David felt when reading the inscriptions on the hallowed monuments and memorials in Washington, D.C.–– words about democracy, justice, freedom, independence and equality. His program will take the audience on a journey through various genres of original and traditional American songs—from Folk, Blues and Spirituals to the American Songbook, Country and Italian and Jewish immigrant songs––each representative of different aspects of our country’s historical struggles, triumphs and diversity.

David has opened for Andy Statman at Irvington Town Hall Theatre, Kenny Loggins at Tarrytown Music Hall, for the Rippingtons at the Paramount Center for the Arts in Peekskill and has performed at The Living Room, Irvington Town Hall Theater, the Bitter End, and numerous other venues. He has released several albums, and most recently an award-winning single entitled "Going to America." David said "I wrote this song because I wanted to express a positive spirit in the face of all the challenges that America faces today. We are all going to America, trying to find America. We can only get there together..."

David will be joined by Ira Levin and Julia Bordenaro better known to contemporary folk audiences as The Levins.

“Few people on this earth were born to sing, but lucky for us, David Goldman is one of them.” ––Christine Lavin