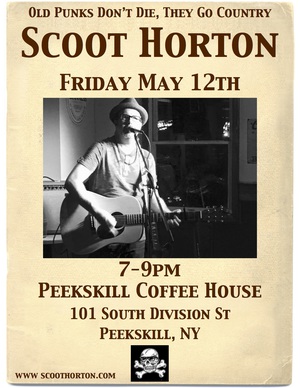 Stop by Friday May 12 from 7-9 pm to hear Scoot Horton play his originals from his cd "Six 2 Seven" along with new songs and some covers. There will also be a special appearance by Marlena Peters.

“Old Punks Don’t Die, They Go Country” is not only a line in one of Scoot Horton’s songs, but it describes Scoot as well. After spending 20 years playing and touring in various punk bands Scoot unplugged his guitar and went acoustic, releasing his debut CD “Six 2 Seven” to positive reviews in 2015. Scoot spent much time in the New York City Hardcore Punk scene, some of that influence naturally comes out in songs like “Life and Hope” and “Bank Man.” And people have noticed. He has been described as the Sex Pistols meet Woody Guthrie. Which makes sense because Scoot’s influences are Bob Dylan, Johnny Rotten, Joe Strummer, and the Carter Family. Scoot plays folk/country as he hears it and what he writes comes with an edge. He calls it Outlaw Folk. Which is short, sweet, and to the point.