Life is Large! A Concert to Benefit Axial Theatre Featuring The Kennedys and Hope Machine 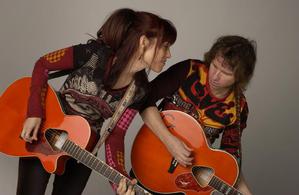 ARTISTS:  For over two decades, husband and wife Pete and Maura Kennedy have traversed the highways and byways of the US and the UK, as a folk/pop duo and as members of Nanci Griffith's Blue Moon Orchestra. As The Kennedys, they have released over a dozen CDs, are longtime core artists on WFUV, and were named Artists-in-Residence at The John F. Kennedy Center for the Performing Arts.

Their original music is uplifting, encouraging and empowering, and their choice of covers is emblematic of their love for the classic songwriting of Buddy Holly, The Beatles and Bob Dylan. Long time New York City residents, they are regulars at the Clearwater Festival and have played legendary venues including Carnegie Hall, the Beacon Theater and the late lamented Bottom Line.

ABOUT AXIAL:  An ensemble-based Westchester theater organization comprised of artists committed to creating professional theater and a vital educational experience for emerging artists. Axial is committed to producing plays, both new and old that speak to issues relevant to today's world.  We also offer programs in acting for children, teens, and adults, and workshops