Scoot and Leo Together Again 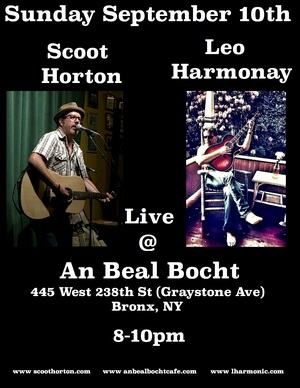 Stop on by a very cool Irish Pub in the Bronx called An Beal Bocht to see Scoot Horton and Leo Harmonay play original and cover songs.

Leo Harmonay is a singer songwriter / blues harmonica player by night, residing north of NYC in the Hudson Valley. He is a high-rise construction manager in NYC by day. Leo sings and writes original folk tinged soulful music filled with poetic imagery. You can see him live, locally in and around the Hudson Valley.

Scoot Horton play country/folk with a slight edge. He calls it Outlaw Folk. Maybe it has to do with spending over 20 years playing on the NT punk scene. Scoot has played anywhere he can from NYC to Nashville.