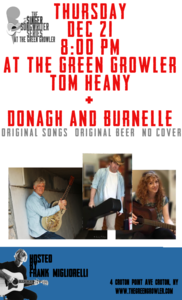 Thrilled to have author, musician and storyteller Tom Heany and the amazing duo, Donagh and Burnelle on one bill for this show!!

Tom Heany grew up in Hastings-on-Hudson. He moved around the country for a few decades and then, in 2016, returned to the Hudson River Valley and got serious about songwriting. His songs call to mind the traditional music of the United States, the classic American songs of the '30s and '40s, and the stories we tell when families get together.Most of his songs are stories, with characters that are hard to forget. There's a cantankerous old soldier trying to explain himself to his grandson; a mysterious drifter who hints at love, vengeance and murder but offers no details; a favorite uncle who walks across the country and never comes back; and an old couple who like skinny-dipping. There are songs about love, too, especially the enduring, tested, life-long kind.One important source of inspiration for Tom has been folk and traditional music. It's easy to hear the influence of storytellers like Woody Guthrie, Stan Rogers and Paul Brady in his songs, with lyrics that are more dialog than poetry. His guitar style comes from players like Doc Watson and Mississippi John Hurt, but also from the songwriters who created American popular music in the first half of the twentieth century. They remain a big influence. Before turning his hand to songwriting, Tom spent years studying the songs of Jerome Kern, Rodgers and Hart, the Gershwins, Irving Berlin, Cole Porter and their contemporaries, and arranging them for solo guitar. He says, “The songs from the '30s and '40s were my guitar lessons. Most of what I know about harmony comes from playing those songs.”Tom's first recording, Reservoir, will be released early in 2018.

The best way to describe Donagh and Burnelle is, ‘An Accidental Songwriting Duo’. Both trained actors, they met while cast opposite each other on the set of a short film, and quickly discovered they shared a mutual passion for songwriting. Until then, Donagh spent years writing and traipsing around the country as a solo act, even spending time in Nashville as a session vocalist for other artist’s demos; Burnelle started out on organ and clarinet, eventually leaving her key to the church’s pipe organ behind, setting out to pursue acting in Chicago & NY…until she picked up a guitar. Stories of rodeo heartbreak and tales of unforgiving crossroads… Donagh & Burnelle are: ‘Folky, Bluesy, Country-ish, Dark, Americana’… as with most opinions, your mileage may vary. But the one thing you should not call them is an original duo that you missed seeing and hearing.