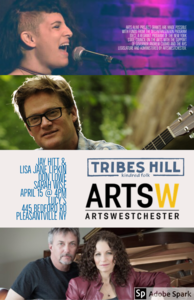 Once again, an amazing triple bill of the finest singer/songwriters and musicians that the Hudson Valley Region has to offer: