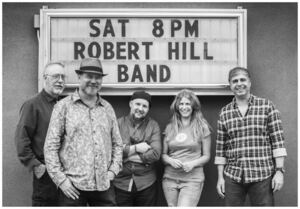 Join The Robert Hill Band for an evening of sliding blues!!  With Mark Murphy on bass, Paul Silverman on piano/keys, Eric Puente on drums, and special guest Paulina Hill on vocals.

His songs have been used extensively on television, including his song, “Long Rain",used for a Smirnoff Ice commercial which aired during the Super Bowl, and continued to run internationally for several years. His music has also been used on "Dexter", ''All My Children", 'Queer Eye For The Straight Guy", Canadian TV series, "Hell On Hooves".and numerous PSAs and radio spots. He has done extensive studio work as well, lending his slide guitar and arranging expertise to many commercials.