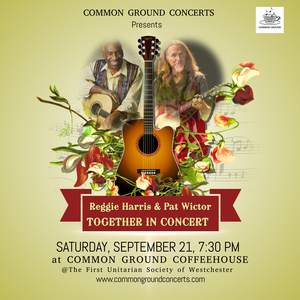 Join us for the opening night of our 2019-20 season with Reggie Harris and Pat Wictor together in concert. Reggie Harris is a singer-songwriter, storyteller, and cultural ambassador on a mission to educate, entertain, and inspire. For over 40 years, he has captivated audiences to standing ovations in the US, Canada, and across Europe. A songwriter of great depth and insight, Reggie writes from a personal but accessible place that reveals his deep sense of humanity and a uniquely positive worldview. He is a trailblazer who performs for audiences of all ages. His effervescently humorous and hopeful presence has led fans to label him the “Ambassador of Joy, Hope, and Freedom.”An educator who entertains, Reggie’s songs reveal the subtle truths of issues that touch our lives regardless of color, background, age, or nationality. It’s about the laughter and the tears… the challenges and the joy… the global and the personal. It’s about history and the present day… the sacred and the laugh out loud funny moments that define us. Reggie received a life-saving liver transplant in 2008. He uses the inspiration and triumph of that gift of life to spread light and hope. Averaging over 250 dates per year, this versatile performer is in high demand at arts centers, schools, universities, and festivals. Reggie is an intuitive presenter in workshops on history, songwriting, and performance. Reggie is a teaching artist for the John F Kennedy Center’s CETA program, a Woodrow Wilson Scholar, and the Director of Music Education for the UU Living Legacy Project. He is a master song leader who deeply values the power of song and the dignity of every human being. Previously known as one-half of the acclaimed folk acoustic duo Kim and Reggie Harris, this natural collaborator, also invigorates his solo touring with occasional partnerships, most notably with Greg Greenway (Deeper Than the Skin) Scott Ainslie (Long Time Coming), and Pat Wictor. Reggie leads workshops and seminars on songwriting, race relations, and performance at colleges and universities, retreat centers, and festivals.  A partial list includes the Kennedy Center Summer Education Institute, The Swannanoa Gathering, Boston’s Summer Acoustic Music Week (SAMW), the People’s Music Network, and the Southeastern Unitarian Universalist Summer Institute (SUUSI).

Pat Wictor first burst on the folk and acoustic scene as an innovative slide guitarist known for fresh and memorable interpretations of traditional and contemporary songs. He has since made his mark as a singer-songwriter penning lean and poetic songs that honor – and subvert – rural blues and gospel traditions. For seven years he toured as one third of Brother Sun, the powerful harmonizing trio with Joe Jencks and Greg Greenway, garnering critical acclaim, two #1 CDs on the Folk DJ charts, and a continent-spanning tour schedule. His latest solo release, This is Absolutely Real: Visions and Versions of Phil Ochs, was nominated for an Independent Music Award in their Best Tribute Album category. An American by birth, Pat’s early years were spent in Venezuela, the Netherlands, Norway, England, and East Texas. His time abroad gave him the perspective of a world citizen, and set him on a journey to understanding America – and his own American-ness – through music. Through these early experiences, he gained an appreciation for taking different paths to arrive at the same destination. Indeed, Pat took a convoluted path to folk music, winding his way through rock, heavy metal, jazz, and free improvisation. He started with guitar, shifted to bass, moved to saxophone, and then quit music entirely before returning to guitar, and teaching himself lap slide guitar. He organized and ran a songwriters circle in New York City for 13 years, mentoring and influencing dozens of songwriters. An adept improviser and accompanist, he is sought after as a collaborator, sideman and session musician, with over 60 recording credits to date, including recent releases by Sloan Wainwright, Jon Vezner, Joe Crookston, and David LaMotte. His monthly e-mail column, “A Few Choice Words,” is read by thousands of subscribers. He is a music educator of note, teaching workshops, songwriting, interpreting, and rearranging songs, on slide guitar and other guitar techniques, vocal and instrumental improvisation, and various topics of music history. Recognition and honors have followed Pat for years: he won the Falcon Ridge Emerging Artist Showcase, was nominated for Emerging Artist of the Year by the Folk Alliance, was nominated for Gospel Song of the Year by the Independent Music Awards, and was a finalist in the Kerrville New Folk songwriting contest. His CDs “This Is Absolutely Real” and ”Sunset Waltz” both reached #2 on the Folk-DJ charts, and “Heaven is so High” and “Waiting for the Water” both reached #4.