Her Crooked Heart and Rachael Kilgour 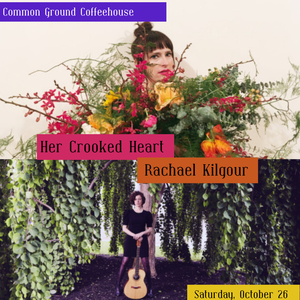 Rachael Kilgour is a Minnesotan songwriter and performing artist whose sincere, lyric-driven work has been called both brave and humane. The 2015 grand prize winner of the esteemed international NewSong Music Performance & Songwriting Competition and winner of the 2017 Kerrville New Folk Contest, Kilgour has been featured at NYC’s Lincoln Center, at The Kennedy Center in Washington D.C. and by the ASCAP Music Cafe at the Sundance Film Festival.

Married in her early twenties, Kilgour devoted her young adulthood to parenting her stepchild and building family and community. Her work from that time (Self-Titled 2008, Will You Marry Me?  2011, Whistleblower’s Manifesto 2013) chronicled her life as a young parent in a same-sex partnership and addressed sociopolitical issues from government corruption to income inequality and religious hypocrisy. Kilgour’s music career took a backseat during those years as she lived a slow, home-focused life.

In 2014, divorce brought an unwanted end to her role as a member of the family she had helped to grow. In the aftermath, Kilgour found solace in songwriting. Her third full-length album, Rabbit in the Road (2017), was born out of that time.

In February of 2019, Kilgour follows up with the release of her new EP, Game Changer. The aptly titled work examines the artist’s tentative first steps into a new world, post-heartbreak. With a clear head, Kilgour touches on the complicated nature of romance and relationship, sets up a stunning defense of queer love, and reassesses her priorities as a citizen of a changing wider world.

Rachel Ries, the writer, multi-instrumentalist and producer behind Her Crooked Heart, demonstrates immense vulnerability and multifaceted musical craftsmanship in delivering personal and profound musical soliloquies on love, leaving and the life that follows after burning it all down. With To Love To Leave To Live (May 2019), Her Crooked Heart presents a debut record unique in form, made up of cyclical narratives and intertwining histories, each informing the next. The result is a transformative song cycle, led by a charismatic personality, wholly indifferent to expectations of genre and instrumentation.

In 2013, after two and a half years of marriage, Ries found herself touring a record around the world, accompanied by a stack of divorce papers in a pocket of her suitcase. She had left her marriage and a good man in New York City and leapt into the untethered unknown. What transpired was in turns euphoria and despondence; old lessons learned in new ways. The songs on To Love To Leave To Live are a compassionate and at times wry catalogue of those tumultuous years.