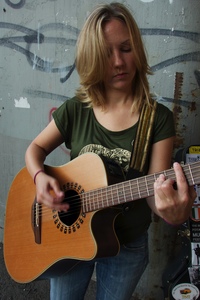 After not hosting a show since September, Groovin’ in New Fairfield, in partnership with the New Fairfield Senior Center and Park & Rec, is back and will stage an eclectic singer-songwriter show that you won’t want to miss. And we'll give you three good reasons why.
We’ll be opening with keyboardist George Mallas, an established songwriter from just over the border in North Salem. You may have caught George at one of the local showcase venues, or perhaps his collaborative efforts with “The Four Horsemen”, featuring four local and very talented singer-songwriters. He also co-hosts Pawling Public Radio’s “Songwriters’ Block” every Wednesday night with lyricist Melanie Berti, with whom he has teamed up to write some great tunes for his latest album (some of which you’re bound to hear). Having been a student of the piano since age 6, he says “the instrument has become a natural extension of who I am”. His experiences in life, love and family have profoundly inspired his songs, his style and passion for playing. You might hear the influences of those notable songwriters he heard growing up: Joni Mitchell, Elton John, Jackson Browne, James Taylor and Cat Stevens.
Next taking the stage will be our Westchester friend, the enthusiastic and gifted singer/songstress Julie Corbalis. You may recall her opening at our coffee house for bluesman Toby Walker a few shows back or you may have caught one of her memorable performances at venues up and down the Hudson Valley either fronting an ensemble of talented musicians, teaming up with long time collaborators as a duo or trio, or out holding court on her own. Whether performing her own take on covers of classics from The Beatles, Rolling Stones, Beyonce, Dolly Parton, Sheryl Crow, Sam Cooke, Bob Dylan, Tom Petty (you get the picture) or a rendition of one of the originals from one of her own CD releases, she can certainly capture a crowd, and has done so opening for the likes of Colin Hay (Men at Work), Amy Correia, Jeffrey Gaines, Johnny Irion and Sarah Lee Guthrie. She’s performed at the Bitter End café (NYC), Brooklyn Bowl, The Hudson Clearwater Revival, Towne Crier and the Pleasantville Music Festival and toured Northern Europe. Add to that, a great rapport with her audience, Julie just doesn’t disappoint.
Closing the night will be frontwoman Andrea Ekizian of Andrea and the Armenian Rug Riders.  Known for their high-spirited performances as a rock band covering songs from groups like the Beatles, the Pretenders and Led Zeppelin, this is Andrea’s opportunity to strut her stuff in front of an audience who’ll attentively listen to her acoustic interpretations of pop/rock classics.  She will be backed by a member(s) of her band, John Scavelli and Brett Roberts. The Armenian Rug Riders have an avid following along their typical Hudson Valley circuit (including our own Ron Statler), so we are psyched to be witness to this incarnation.
Remember, you can get there just before the show starts (doors open at 6:45 PM) and chill with meal worthy food (thanks, Bruno’s of NF) at a modest price. There’s also deserts, beverages and, oh yes, coffee. Reservations can be made by calling 203-312-5665. Still only $10.
See you at the show.