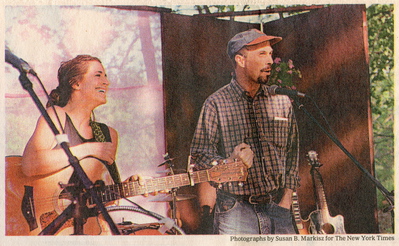 One of Westchester's oldest surviving homes, the Hammond House, is sharing the spotlight with a number of folk-oriented musical artists at a concert series here this month and through the summer. Frederick Rock, owner of the historic property with his younger brother Michael, inaugurated the series last month, and on Sunday, June 17, he will present a performance featuring the ever-popular sisters Terre and Maggie Roche.

Held outdoors in the backyard of the Hammond House, which is open for inspection by paying guests, the decidedly informal concert events are preceded by a pot-luck dinner and follow very much in the vogue of hosting intimate musical gatherings in one's home. Mr. Rock, an art and antiques dealer known by friends as Rick, said he started the series to give independent musical artists who work without the support of a record company a showcase in the area for their talent and an opportunity to network with each other. "I see what I'm doing as part of a revolution against the big business of the music industry," he said. "By bringing these musicians and singer-songwriters together I hope to create a stronger audience for all of them, which is crucial for their survival. I want them to feel proud of the musical traditions they're keeping alive."

Mr. Rock mentioned that he didn't believe in augury until a psychic astrologer in New Paltz, NY--"a modern-day oracle," he said--told him ten years ago that "when I was in my early 40s I would have this house that I would use to promote people in the arts, and in doing so I would find my own creative force. I even have what she said on tape." Self-fulfilling prophecy or not, Mr. Rock not only found a dream house to put to good use, he also saved, with his brother, one of the area's landmark dwellings. Built on part of the Philipse manor estate in 1719 by William Hammond and later resided in by his son, Col. James Hammond, a commander of the Westchester militia during the Revolutionary War, the house is said to have been visited several times by George Washington in the 1780s.

After serving for a great many years as a museum, the house and property were sold by the Westchester County Historical Society to neighboring New York Medical College, which used the building as a laboratory in research on Lyme disease. And although the Hammond House was placed on the National Register of Historic Places in 1976, it was slated to be dismantled in 1995 when the Rock brothers managed to buy it. Since then the elder Mr. Rock, who lives in the house, and his brother, a sub-contractor and New York City resident, have completely refurbished the edifice, restoring the aura of centuries past to several of its rooms. "Every once in a while I stop to admire the place and try to imagine what it was like to live here 200 years ago," said Mr. Rock. "Michael and I worked hard to bring back the house's natural character, but it's been worth the effort."

Plans for the concert series at the Hammond House germinated during the regular hootenannies Mr. Rock started hosting in his home in 1999. An inveterate music fan, he'd befriended quite a few musicians over the years, including Ashley Cox, a 27-year-old singer-songwriter from Syracuse, NY, and when she mentioned several months ago to Mr. Rock that she was putting together a show called "Mother Music" to feature herself and several other women performers, he decided to offer his house as a venue. "Putting on just one show didn't seem enough," recalled Mr. Rock with a laugh. Before long he'd booked a whole season of concerts, with artists and bands like the Kennedys, Jack Hardy and ex-House of Red vocalist AnneMarie Milazzo scheduled to appear at the Hammond House through this summer and early fall. Ms. Cox will act as the master of ceremonies and open several of the shows. "Rick has a heart to create something magical here in Westchester," said Joziah Longo, an Ossining resident from the band Gandalf Murphy & the Slambovian Circus of Dreams. "His motivation is really unselfish and a lot of people will benefit from his energy and connections. "

On a sun-dappled stage beneath a canopy of tall maples Ms. Cox opened the "Mother Music" show at the Hammond House last month, and she was followed by Andrea Florian, an up-and-coming performer from Toronto who said afterwards she was "amazed by all the new friends" she met at the show. Cadence Carroll, a percussionist-singer from New Canaan, CT, who also performed, watched her fellow musicians pack their instruments at the end of the show and said: "It was a beautiful day. All of the musicians spent the afternoon learning parts in each other's songs, so it was all about sharing music. I'm sad it's over."