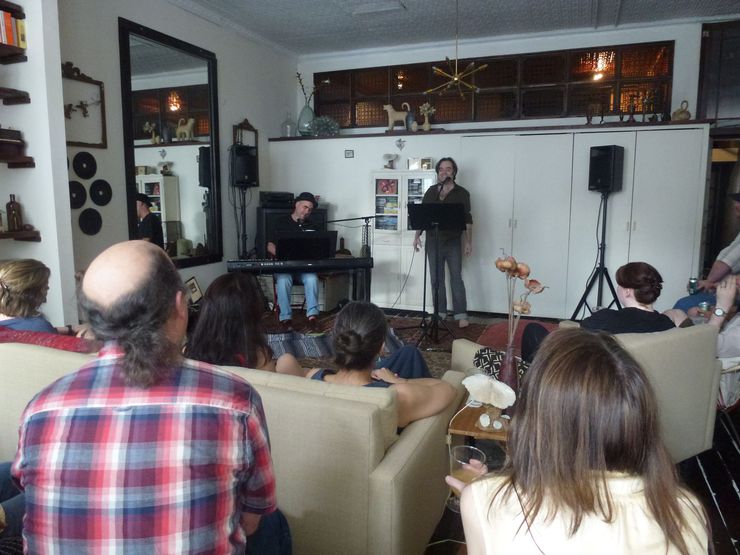 The musical community in Westchester continues to rally around Rob Morsberger, the singer-songwriter, composer, multi-instrumentalist and longtime Croton-on-Hudson resident battling malignant brain cancer, who, remarkably enough, is still plying his art with a level of energy and enthusiasm that should be the envy of the healthiest among us. This weekend he is up in the Boston area performing a series of shows to promote the release of his latest CD, Ghosts Before Breakfast, and he is already putting the finishing touches on two new albums.

Even though he is in possession of medical insurance, Morsberger has been racking up the kinds of bills that independent musicians struggle to pay. His good friend and neighbor, the remarkable guitarist Peter Calo hosted two benefit concerts for him at the BeanRunner Café in Peekskill in March 4, which drew sold-out crowds. Next up: on June 3 the Hudson Valley folk-pop collective Tribes Hill will be presenting Morsberger and Crash Test Dummies frontman Brad Roberts at the Music Hall in Tarrytown, where the duo will be premiering their song-cycle Midnight Garden and performing selections from their own repertoires as well. .

Though Morsberger is well known in television circles for his soundtracks, most notably for Nova scienceNow on PBS, he also earned a good deal of notoriety in the late 1990s Gotham music scene leading his own band. Formed with three top-notch players—guitarist Jon Herington, bassist Paul Ossola and drummer Robin Gould—whose credits stretch from Steely Dan to Carly Simon, the band released two CDs—Waiting for Wood in 1999 and Relativity (Blues) the following year—and then Morsberger’s television work picked up. It took several years for Morsberger to sneak away long enough from his so-called “day job” to write and record his third CD, A Periodic Rush of Waves, which appeared in 2006.

For Ghosts Before Breakfast, Morsberger first re-convened Herington and Gould, with Zev Katz and Paul Socolow splitting the bass duties, and at the urging of documentary filmmaker and fellow Croton-on-Hudson resident, began work on the title track, which underscores a 1927 silent film by Hans Richter, an artist and one of the founders of the Dada Movement. In the chorus of the song, Morsberger sings, “Hello, everybody, there’s no times for tears / Baby, it’s a new life, everyday”: An understandable statement considering what the singer-songwriter is going through.

Two years ago, Morsberger was busy helping out his good friend Stewart Lerman, a renowned music producer, with the Crash Test Dummies’ last album, Oooh La-La!, when he became acquainted with Roberts. Mosrberger, who wrote the string arrangements for the album, remarked to me that it was one of the more interesting projects he’d worked on in a while, and then lent me the CD when it came out. Roberts, the chief auteur of the Crash Test Dummies, has always had an eclectic approach to songwriting, choosing to switch around styles and genres while loading his lyrics with a lot of allusions and cryptic narratives. Front and center in the music is Roberts’ deep baritone, which is reminiscent of Leonard Cohen, Iggy Pop and Nick Cave.

“It’s fair to say that all Crash Test Dummies records don’t sound the same,” said Roberts by phone from his Manhattan apartment this week. “I have a very inclusive sense of musical taste, which spurs lots of ideas. If I were doing the same thing in the studio all the time, then my work would have grown old pretty fast. When you keep a stock sound, you may please the same fans over and over, but I trust that what I’m doing won’t alienate people who follow my work. On the Crash Test Dummies album Give Yourself a Hand, we went for a more urban sound, which represented maybe a one hundred and eighty degree turn from what we were previously doing. There were people who hated the album, but we also found new fans who decided they were interested enough in the band to listen to other stuff we’d done. And they kept coming back. So, I’m not adverse to the risks of making bold moves with my music.”

Roberts grew up in Winnipeg, Canada among family members who were self-taught musicians. His mom was a singer and his father played piano; both sets of grandparents played various instruments, including harmonica, mandolin and violin. “They’d stir up martinis and play music all night long,” Roberts fondly recalled of the family’s musical gatherings.

“In Canada where we lived, you’ve got some long winters, and guys either played hockey or found instruments and started bands in basements,” Roberts said. “I began on piano, then moved to guitar, which was cool because you could carry it around and play anywhere you liked.”

After graduating from the University of Winnipeg in 1986, Roberts stuck around town and earned a living in some of the local bar bands. He attended a songwriting workshop led by Lyle Lovett and then began to compose steadily. With his band, the St. James Rhythm Pigs, he recorded a demo of songs, which landed him a record deal. The band changed its name to Crash Test Dummies and released its debut album, The Ghosts That Haunt Me in 1990. Over 400,000 copies of the album were sold across Canada, earning Roberts and his cohorts a “Best New Band” Juno Award the following year.

Signed by Clive Davis at Arista Records, the Crash Test Dummies returned in 1993 with God Shuffled His Feet, which sold over six million copies and brought the band three Grammy Award nominations, largely on the strength of the quirky title track and a big radio hit, “Mmm Mmm Mmm Mmm.” Listening to it today, the album has that oversized sound that was popular in the 1990s, when click tracks and booming snare drums made everything sound overproduced.

“We were so naïve when we first started making records—we had no idea what was going on,” Roberts remarked. “The first album rockets to the top of the charts in Canada, and we were simply oblivious to the fact about how rarely this occurred. By the second album we had more experience, but we still neglected to take stock of where we were. But this was the 1990s, before file sharing. We were successful enough that we could take time to make subsequent records and compose songs we liked.”

After Oooh La-La!, Roberts sent Morsberger a new lyric he’d written “on a whim,” he said, “and two days later Rob sent me a demo of the song now set to music with a beautiful melody and his vocals. I was flabbergasted that he’d take such interest in my words, and was absolutely floored by the music. I told him I had about twenty other lyrics, and before long we were working together on what has become Midnight Garden. I really wasn’t looking to make another record—this really fell into my lap, but what a blessing it has become. Rob is incredibly gifted and easy to work with—we did not clash once. He’s so level-headed and reassuring. We had such a great metaphysical meeting of the minds.”

Midnight Garden is a brooding, heartbreaking work, twelve songs that intertwine the search for happiness and world of loneliness. It’s mostly recorded with just Mosberger on the piano and a small string section, and on several songs Morsberger sings as well. I heard flashes of Stephen Foster, Randy Newman and Charles Ives in some of the arrangements; a ‘live’ efflorescence—a Westchester premiere!—is worth looking forward to.

Brad Roberts and Rob Morsberger plus special guests from Tribes Hill will perform on Sunday, June 3 at the Music Hall, 13 Main St., Tarrytown, NY. The show is at 7 PM. For tickets and more info, call (914) 631-3390 or visit tarrytownmusichall.org.