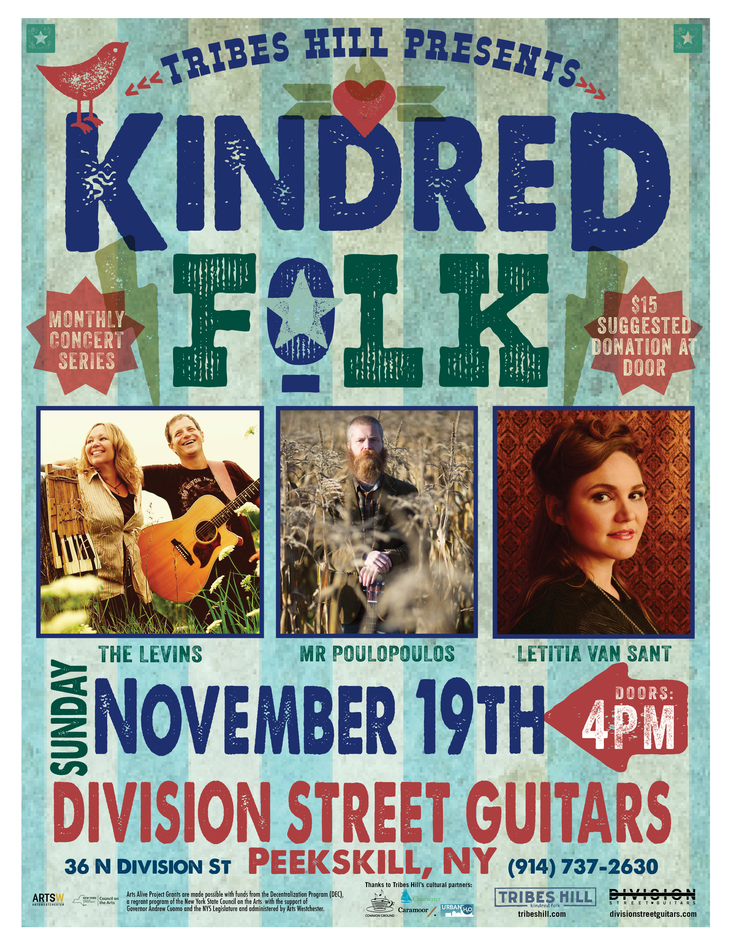 Tribes Hill Presents Kindred Folk has an absolutely fantastic trio of acts this month, which is not to be missed!!! Bring your families and friends to Division Street Guitars!!! This series is supported by a generous Arts Alive Project grant from Arts Westchester.

This will be our last (and maybe best) lineup of the year before our annual hootenanny on December 17th!

M.R. Poulopoulos
"By turns intelligent, soulful, and melodic, acoustic singer-songwriter M.R. Poulopoulos is one of New York’s Capital Region’s most honest and eloquent artists. His wide-ranging influences share a common foundation in American blues and roots music, but his sound is very much his own. Poulopoulos’ first solo album, Greenhorn, was released to critical acclaim, and his follow-up, Harvest the Heart, expanded his sound as well as his fan base. He has also worked as part of the acoustic duo Palatypus and carries the torch for his band Rebel Darling."  www.rebeldarling.com

Letitia Van Sant
Letitia VanSant writes songs that trace the world's problems into the depths of the human heart. Delivering her lyrics with a uniquely intimate voice, VanSant is a 2017 winner of the Kerrville New Folk Songwriting Competition, a 2017 Falcon Ridge Emerging Artist, and the winner of the Mid-Atlantic Songwriting Contest. Her first nationally-distributed album Gut It to the Studs will be released in February 2018.  https://www.letitiavansant.com/

The Levins
The Levins are a harmony-driven acoustic duo known for their peace-infused songwriting that connects on a universal level and celebrates our common humanity. These award winners (Indie Acoustic, Empower Music, CTFolk, S.Florida Festival, MASC) were 2017 SERFA and 2016 NERFA Formal Showcase Artists and 2014 Falcon Ridge Emerging Artists. Unique harmonies and tightly blended unison vocals, along with their guitar and piano interplay, reflect the couples own compatible musical/personal relationship which began after meeting at an open mic at The Freight and Salvage in Berkeley CA. TheirMy Friend Hafiz CD debuted in the top 20 on Folk DJ & their latest, TRUST, debuted in the top 10. (Top 10 song/2015, J.Platt, WFUV) and "underscores the positive messages of love, peace and self-awareness. Each tune serves as another stepping stone toward a better day & a richer life." Tom Staudter.   www.thelevinsmusic.com